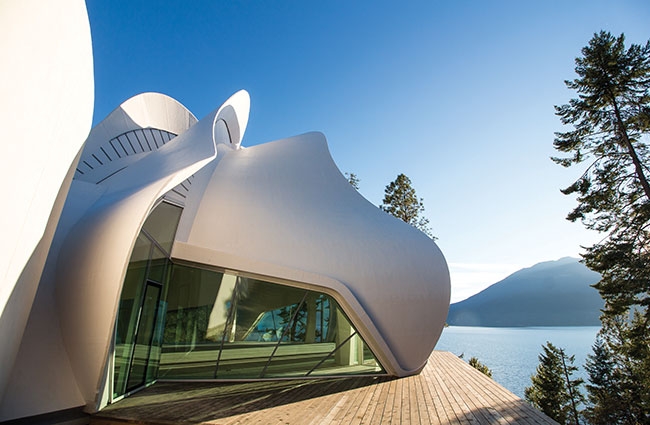 The site was a 10-hour drive from the contractor. 3D modelling was used to avoid site measurements.

From the glazing company to the architects to the construction firm, the same word was used in describing the rebuild of a popular B.C. spiritual and yoga retreat: renewal.

Blackcomb Glass, Patkau Architects and Alfred Horie Construction were all instrumental in the rebirth of the Yasodhara Ashram, or Temple of Light, a yoga retreat and study centre founded in 1963 by the late Swami Radha at Kootenay Bay, B.C., in the province’s southeast corner, on the east side of Kootenay Lake. The centre, which sits on a hilltop, was destroyed, save for the original foundation, in a June 2014 fire. Blackcomb Glass, Alfred Horie Construction and Patkau Architects collaborated throughout the redesign and rebuild phases to construct a new temple which was finished in 2017 and reopened in June 2018. The design fell to Patkau Architects, who were approached by the owners to renew the temple site by constructing a rarefied, dome-like space on the original foundation. To flood that interior with light required the work of Blackcomb Glass of Whistler, B.C.

Blackcomb designer J.F. Robert called working on the Temple of Light “exceptional; one of our top-three projects. Collaboration was the key.” Design and 3-D modelling of the 2,250 square feet of glass required for the project was critical, especially having to deliver to a location 10 hours away from the shop on a remote hillside where you have to use a ferry to get to the centre. “The logistics were crazy and there were a lot of quirky things on the design,” Robert remembers.

The major challenge of the project was to execute the design’s evocative geometry on a tight budget. “The complex, curvilinear geometry of this project was achieved with relatively modest means and conventional building materials by fabricating its sweeping petal-like forms utilizing principally straight engineered timber elements,” says Luke Stern of Patkau. “Each subpanel was manufactured to a high degree of precision off-site using modern digital manufacturing methods and custom, reusable jigs with knock-outs that allow the completed, convex frames to be released once assembled. Following manufacturing, the pre-clad subpanels were shipped to the site, efficiently assembled to enclose the domed primary worship space, and then glazed and sealed.”

AT A GLANCE – Temple of Light