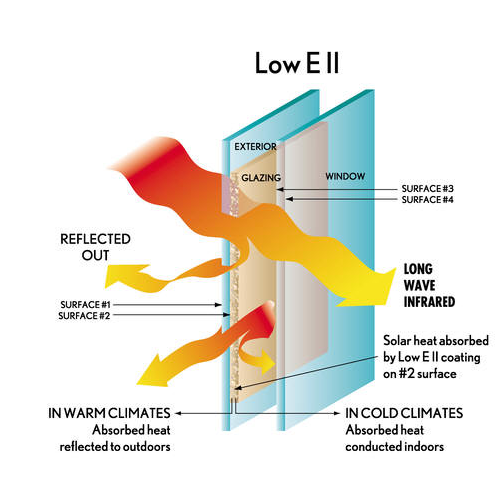 I still hear a lot of confusion about transmission of thermal energy, even in this business where we are supposed to know what we are talking about. One common misapprehension is that low-emissivity coatings do what they do by reflecting heat the way a mirror reflects light. I think some people look at the silver coating on Thermos bottles and deduce that the shininess of the surface must have something to do with it.

This is incorrect. The glass walls of Thermos flasks are coated with silver on the outward face of the inside wall and on inward face of the outside wall.  In double-glazed IGU lingo, that would be on surfaces 3 and 2, respectively.  This YouTube video shows how thermos flasks are made.  A silver solution is injected in to the cavity between the flask walls beginning at 0.45 seconds, then the flasks are put onto a roller conveyor that spins the bottles so the solution coats the cavity-side walls (surfaces 3 and 2) beginning at about 0.52 seconds.

The key is to know that glass is almost opaque to terrestrial radiation, so a surface 3 low-E cannot reflect room-side radiation back into the room. The glass on which it is applied prevents radiation from inside the room to directly contact the coating. Instead, radiation is absorbed by surface 4, conducted through the glass to surface 3, then re-radiated across the IGU cavity (air, 90% argon/10% air mix, etc.) to surface 2 where the process is repeated to transmit radiant heat to the outdoors. “Low-E” is short for low emissivity:  the coating on surface 3 reduces the emission of radiation across the IGU cavity. There is no direct transmission of radiation through window glass. This is the same reason why, when doing and infra-red scan, you don’t can’t see inside a building – no people, lights, computers or other heat sources.  You only see how warm is the outside pane of glass, indirectly heated from inside the building and often, influenced by objects outside.

In the case of a Thermos flask, with liquid in contact with inner glass wall there is no radiation from the liquid to the inner wall – objects in direct contact cannot exchange energy by radiation. Heat is transferred from the liquid to the glass by conduction and convection only. However, like double-glazed IGU, heat is then transferred through the glass by conduction and then emitted from the outward facing surface (surface 3) across the vacuum in the cavity between the inner and outer walls.  The silver coating on the outward facing surface greatly reduces radiation emission. Since the silver coating on the inward facing surface of the outer wall (surface 2) is facing a cavity, it can reflect radiation, so very little of the radiation energy emitted from the inner wall is absorbed by the outer wall. Overall, very little heat energy is transmitted outwards. A Thermos flask is a close, but not perfect, analogy to how an IGU works.

To be fair, lots of people get mixed up on this.  There are many references to surface 3 low-E coatings reflecting heat back into a room. It doesn’t. However, room-side or surface 4 low-E does. That’s because it is on the surface facing inward, so radiation from objects in the room – people, light, computers, etc. – strikes the coating directly.  Such coatings are not really acting as low-E coatings but instead, as reflective coatings.  Unfortunately, that just adds to the confusion.