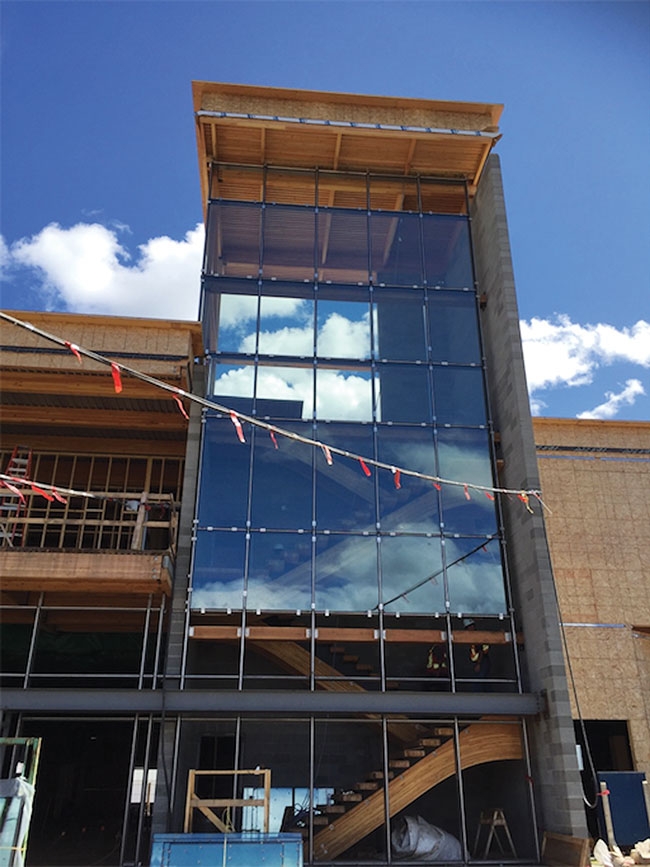 Recent advances in fibreglass reinforced plastics (also known as FRP, fibreglass composite or simply fibreglass) and the pultrusion process that manufacture them have only recently opened the door to exciting new uses for this material in a variety of applications.

You are likely already familiar with FRP as a thermal break to replace conventional (and conductive) aluminum pressure plates with far more insulative composite material. This application of FRP has been used for over a decade in higher-performance aluminum curtainwall systems, but only much more recently has it been possible to pultrude an entire curtainwall mullion out of fibreglass. Over one million glass strands and a proprietary mixture of high-performance resins are required to make this 21st-century profile a reality. Since 2013, a fibreglass-framed curtainwall system has been commercially available – one made in Canada, no less. Pultruded as continuous lineals before being cut into stock lengths (up to 30 feet long) that are then fabricated to suit the project’s design and installation requirements, there are a number of important advantages to FRP curtainwall frames, not least of which is price stability in a world increasingly characterized by tariffs and commodity fluctuations.

Of the five principle advantages of fibreglass-framed curtainwall systems the primary advantage is thermal performance, which we can further break down into conduction, convection and radiation. While we usually measure building envelope performance in terms of conduction, it is also useful to consider convection and radiation, particularly for the thermal comfort of occupants. After all, buildings are for people. Building owners and operators deploy far more capital on human resources than they do on the buildings themselves over the lifespan of the structure. In today’s hyper-competitive labour market, even the tiniest advantage can help to attract and retain top talent, and a well-lit, thermally comfortable environment can make all the difference, particularly for the discerning Millennial generation now shaping the professional world. Convection is largely determined by the type of glass used. Low-E coated, argon-filled triple-glazing results in an air speed across its surface of 0.73 meters per second compared to a very drafty-feeling clear double-glazing at 1.39 meters per second. The curtainwall framing material plays more of a role in terms of radiation, with FRP being substantially less emmissive than aluminum. Not that this will be news to any Canadian who has ever huddled away from a cold restaurant curtainwall when the mercury plunged in December. In terms of conduction, however, which is what energy codes and energy models primarily consider, fibreglass-framed curtainwall can readily achieve overall system U-values of 0.85 (R6.7) using the same glazing that high-performance aluminum systems use to achieve no better than 1.3 (R4.5). This delta is a simple material function. Fibreglass is a lot less conductive than aluminum, greatly reducing the thermal bridge that conventional curtainwall frames suffer from.

The second advantage is the ability of fibreglass to resist corrosion, which has obvious benefit in high-humidity or industrial environments. This is why we see FRP used extensively in marine applications. An attendant benefit of not requiring anodizing (as aluminum does to obtain its corrosion-resistance) is that span-limiting anodizing tanks are also not required for fibreglass. As such, FRP mullions can readily be pultruded and installed in lengths up to 30 feet, meaning that complicated and unsightly stacking and tower joints are only required on vertical mullions every two or three storeys.

The third advantage of FRP is a reduction in environmental impact and carbon footprint relative to aluminum. Often this is referred to as embodied energy, and fiberglass has 60 per cent less embodied energy than an equivalent profile of aluminum. This is due in part to differences in the manufacturing process of the respective designs. FRP is pultruded by drawing up to a million glass strings through a hot bath of resins. Then the coated threads are pulled through a heated die in a continuous process that is limited only by the length of the spooled glass strings. Aluminum extrusion manufacturing requires an incredible amount of pressure to transform solid ingots of material into a slender profile by pushing it forcefully through a die. The lion’s share of the difference in environmental impact and carbon footprint, however, is in the manufacturing of virgin aluminum ingots. While some recycled aluminum is incorporated into new curtainwall mullions, on average it’s only 17 per cent. A lifecycle assessment completed by the Athena Sustainable Materials Institute determined that FRP curtainwall profiles contribute 60 per cent less to global warming, 50 per cent less to acidification, 40 per cent less to smog and 10 per cent less to eutrophication when compared to aluminum.

A fourth advantage is in the expansion and contraction of fiberglass relative to the glazing. Unlike aluminum, with a linear temperature expansion coefficient of 21 to 24 per unit of length and temperature, plate glass and fiberglass framing expand and contract with the same coefficient of expansion of about nine. This benefit results in gaskets that last longer and seals that are more durable than those in aluminum systems

The fifth advantage of FRP is the esthetic experience. Readers can of course decide for themselves at one of the eight completed fibreglass-framed curtainwall projects located in Edmonton, Calgary, Red Deer, Slave Lake, Winnipeg and Iqaluit, but your author is smitten. Better still, painting the mullions is readily accomplished at modest cost, allowing for a near-infinite colour range for designers. Fibreglass-framed curtainwall systems are also designed to accommodate FRP pressure plates and conventional aluminum caps, which allows for the usual range of anodized aluminum colour choices for the exterior caps while protecting the fiberglass from ultraviolet light.

Where can these five primary advantages be put to best use? Fiberglass framing works well for institutional, government and corporate projects with demanding owner-occupiers where envelope performance and returns on human capital are top priorities. The exclusively triple-glazed, exclusively stick-built, fibreglass-framed curtainwall systems out there now are not going to win race-to-the-bottom bidding wars against the double-glazed aluminum systems that make up the bulk of the market in the low- to mid-rise segments and utterly dominate the high-rise segment. That said, the new energy step codes in place in some Canadian provinces (B.C., Ontario) require better thermal performance from their glazing systems and will become dramatically more demanding in the next decade. Projects seeking certification from LEED, Living Building Challenge, WELL Building Standard, Passive House or other stringent performance standards would do well to consider fibreglass-framed curtainwall systems for their superlative thermal performance and comfort, low environmental impact, and competitive price point in the segment. Compared to curtainwall systems with similar thermal performance to that offered by FRP-based systems, European options such as Raico Therm Plus, Schuco FW 50 Plus, and Reynaers CW 50-HI are offered only at much higher price points, upwards of double what high-performance curtainwall systems can sell for in North America. Sales and technical support for these sophisticated European systems are also an ocean away.

Still, fibreglass-framed systems are not a magic bullet and they are not the best choice for every application. Multi-family residential and retail, for example, may be better suited to window wall or lower-performance curtain wall to satisfy the budget-oriented needs of these types of buildings. High-rise buildings or buildings on very tight construction sites are better served by metal-framed curtainwall because they require unitized systems, of which there are currently none using FRP. Fibreglass framing is also not suitable for buildings requiring blast ratings, hurricane-resistance ratings, fire ratings, non-combustibility ratings, or such designs as skylight frames and four-sided structural silicone glazing. Some of these limitations will be overcome with future advances, but some simply cannot due to the material properties of FRP, such as fire ratings and non-combustibility ratings.That said, while fire ratings and non-combustibility ratings are beyond FRP’s scope, this does not necessarily preclude fibreglass-framed curtainwall from being used on buildings requiring non-combustible envelopes. The Canadian National Building Code makes allowance for otherwise combustible materials to be used as if they were non-combustible if the buildings are a) sprinklered throughout, or not more than three storeys in height; b) use appropriate interior thermal barriers; and c) the combustible materials conform with the criteria laid out in CAN/ULC-S134, “Fire Test of Exterior Wall Assemblies.” Recently, this stringent test was achieved by GlasCurtain and we are unaware of any other FRP curtainwall systems that have achieved this rating.

Another limitation of FRP is the cost of new pultrusion dies and the impact of this on project-specific customization. While aluminum extrusion dies can be cost-effective to customize for a single project, permitting several custom dies to be reasonably absorbed by a larger project with unique design requirements, pultrusion dies are more expensive and it may therefore be cost-prohibitive to customize more than one new FRP shape, even on larger projects.

So these are the more measurable pros and cons of FRP curtain wall systems, but what about the nuts and bolts?

For fabrication, compared to aluminum, additional precautions must be made to handle to dust created when cutting fibreglass stock lengths. Although fibreglass dust is not toxic or carcinogenic, it is an irritant. As such, full-body personal protective equipment is required for cutting the stock lengths, though only breathing masks and eye protection are required when notching and attaching spigots.

For installation, additional care and attention is required due to the added weight and size of the fabricated mullions. Not only are the mullion walls of fibreglass framing thicker and heavier than comparable aluminum ones, but the pieces can also be longer because of the aforementioned corrosion resistance and lack of need for smaller lengths to fit inside anodizing tanks. Failure to handle longer pieces of fibreglass from both ends can result in cracking. As such, ropes, ratchets, straps, hoisting equipment and more-patient-than-average installers are important to protect the material from damage. Furthermore, the pull-out and shear values of fibreglass are lower than those of aluminum, requiring a “measure twice, cut once” approach to screwing into the material because the same hole, once screwed into, cannot be reused. That said, there are overall far more similarities than differences when installing fibreglass-framed curtainwall and experienced installers might even enjoy the new challenge. Hey, why not? Learning is fun!

As to structural performance, there is little edge to give or take between fibreglass-framed curtainwall and aluminum curtainwall. Both handle wind loads and dead loads comparably and both can be reinforced with high-strength steel internally for added stability and greater wind load resistance.

Lead times are competitive as well, with pultrusion taking three to six weeks and fabrication taking two to four weeks. While painting of the FRP frames is not required – the dyed material is UV-resistant without further protection – factory-applied spray paints are available and add two to four weeks to lead times with only a nominal increase in cost.

While still not suitable for every application, the early success of fibreglass-framed curtainwall systems shows just how well they are adapted to life in the Great White North.

Peter Dushenski, BSc, BEH, CPHI(C), is the managing director of GlasCurtain. The Alberta-based firm has completed eight projects across Canada with many more in the pipeline. GlasCurtain is Canada’s only manufacturer of fibreglass-framed curtainwall systems.
Print this page