Beautiful Banff was the setting for advanced technical discussion. 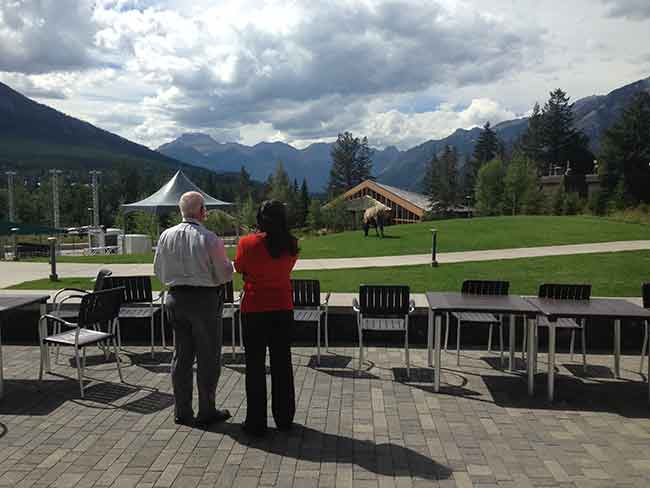 Bill Lingnell of IGMA and Urmilla Sowell of GANA try to assess whether this visitor will agree to chair a subcommittee.

Delegates at the Insulating Glass Manufacturers Alliance 2016 Summer Conference sometimes had to tear themselves away from the breathtaking views and visits by the local wildlife long enough to concentrate on the excellent technical progam Aug. 8 to 10 at the Banff Centre for Creativity and the Arts in Banff, Alta.

About 75 IG fabricators and their suppliers gathered to join discussions on cutting-edge technical innovations and changes to standards interspersed with lots of networking and a fun night at a mountain lodge.

The theme for the Tuesday-night networking dinner was “Are you a lumberjack?” and most of the IGMA delegates proved that clear mountain spring water does indeed flow in their veins with an impressive display of flannel, work boots, toy axes, hats with ear flaps, false beards and even a Mountie uniform. Prizes were handed out for best mens’ and ladies’ costumes, best lack of a costume, longest sustained effort in support of the industry and most “bear-like” in promoting the industry.

In the conference room, delegates heard from the Certification, Emerging Technology and Innovation, Technical Services and Education committees. The content was, as always, fascinating, acting as an overview of the outstanding issues in IG fabrication best-practices and a look ahead to what the industry will be doing in the future to continue to improve and stay competitive. For instance, delegates heard presentations on an update to an ISO-style quality program specifically for the glass industry, new ways to do the butterfly test for sealant adhesion, a creative solution to turning monolithic windows into triple IG without ripping them out and an update on environmental declarations for glazing products which will soon be mandatory for LEED projects under Version 4, which comes into effect in October.

Jeff Haberer of Trulite chairs the Technical Service Committee. Tracy Rogers of Quanex reported on the activities of the Glazing Guidelines and Visual Quality subcommittees. Rogers reported that Glazing Guidelines is working on a draft guideline for IG units with unsupported edge conditions, for instance, two-sided butt glazed units. He noted that the IGMA does not support doing this, but since it is happening anyway the subcommittee has decided to address it.

The Visual Quality subcommittee is working on a consumer education web page that will outline acceptable visible flaws in IGUs. The hope is that this will mitigate problems with consumers rejecting whole units on the basis of very tiny imperfections. The page is to include introductory information with baseline knowledge about IGUs, an introduction to the applicable industry standards, a FAQ section and guidelines for inspecting IGUs. Some felt a similar document for commercial clients would be useful, too. The page is being produced in partnership with the American Architectural Manufacturers Association and is going through their balloting process before returning to IGMA for approval. When it is ready, it will appear at glassdocs.com, a huge information portal run by the Glass Association of North America, the National Glass Association, AAMA and IGMA.

Rogers also reported on the Vinyl Siding Distortion subcommittee that is also preparing an educational web page addressing the concern that low-E glass can reflect solar energy causing damage to nearby vinyl siding. The subcommittee is drawing information from a variety of sources to refute this myth, which gained some traction in the U.S. after a vinyl siding association produced a YouTube video.

Haberer reported that the IG Cavity Width subcommittee had some delays in getting its draft document ready because of discussions over how to treat the question of the effect on U-factors of IG cavity width. Some feel it is too simplistic to draw a straight line between cavity width and U-factor, while others feel it can’t be denied that a smaller cavity will lead to increased U-factor unless other steps are taken. The U-factor material may end up in an appendix or taken out entirely.

David Cooper of Guardian discussed the work of the PIB Migration subcommittee. The joint subcommittee with the Glass Association of North America is working to define the problem of PIB migration out of IG seals. At this time it looks like the scope of the group will be limited to finding a testing protocol, and the likely candidate is one from the Rosenheim Institute in Germany. The focus now is on finding out if any other chemicals or components interact with PIB to make it more likely to flow after installation.

Cooper also reported on efforts to update, archive or discard hundreds of old technical documents. He said the IGMA’s glazing guidelines should soon be available in French.

Jeff Baker of WestLab reported to the committee on Energy Star. The Canadian Office of Energy Efficiency administers Energy Star and has been funded through 2021, so the program is not going anywhere. The overhaul of Energy Star’s digital properties continues, with changes to the web addresses coming as well as Facebook and Twitter accounts. The big recent change has been to require all Energy Star product data to be submitted through recognized certification organizations only, instead of direct from the manufacturer. Energy Star officials are looking at certifying storm windows and possibly including solar heat gain data in their assessments. Also, the program recognizes that steps are needed to tighten enforcement of the use of the label and prevent substandard products from being sold under the name. Mystery shoppers may be used to purchase products and have them tested.

Helen Sanders of Sage Electrochomic chairs the Emerging Technologies Committee. She gave a presentation educating delegates about the new rules that will be coming in with LEED v4 in October that will require manufacturers to have official Life Cycle Assessments and Environmental Product Declarations prepared for their products in order to qualify for sustainability points. The IGMA along with other glass building organizations has helped this process by putting Product Category Rules in place for flat glass, processed glass and windows. The association is now working with the Glass Association of North America to see if it can produce a generic, industry-wide EPD for processed glass products.

Sanders introduced Tracy Rogers, who gave the committee a presentation on an innovative system from Quanex that can be retrofit to old windows, essentially upgrading monolithic single glazing to double-glazed, or upgrading double-glazed to triple, without removing the old fenestration. Rogers described how the system was tested on a building constructed in 1971 in Philadelphia. The heart of the system is a slide at the bottom of the frame that allows the interior lites to be attached without distorting the existing spacers. In the case study he presented, two pairs of side-by-side rooms with different orientations on the building were compared for a year with and without the system. Heating cost reductions of 40 to 60 percent and cooling cost reductions of around 35 per cent were measured in the retrofit rooms. The systems can be installed at night without evacuating the floor and without any exterior work. Quanex estimated the cost of ripping out and replacing the old windows would have been around $1.8 million, while retrofitting the whole building with this system cost $800,000.

David Cooper updated the committee on the white paper on vacuum insulating glass recently published by the VIG subcommittee. The subcommittee is now looking at developing a test standard. An ISO durability and dimensional tolerance test looks right now like it will fit the bill. It does not appear that temperature and humidity affect the performance of VIG units. Ultraviolet radiation can negatively affect some of the chemicals used in VIG, so work has begun on developing a UV resistance test. Mechanical load testing is also in development.

Tracy Rogers reported from the Advanced Fenestration Testing subcommittee on efforts to find a screening test that would reveal the need for full ASTM E2190 and E2188 durability testing, thus reducing the need for time-consuming and expensive destructive testing. The subcommittee is looking at test from five different labs with such colourful names as Big Hammer and Thumper. Many of the tests seem to deliver results that successfully predict the results of the full tests. Now the subcommittee will expand the test criteria and try to address different standards.  John Kent of the Insulating Glass Certification Council reported that using interim data predicted the results of the ASTM test 85 per cent of the time, leading to speculation that this may open the door for some kind of provisional certification allowing manufacturers to go ahead with products pending future completion of the full test.

Randi Ernst of FDR Design talked about gas measurement validation. Efforts to develop a test standard are slowed by the difficulty of controlling the many variables involved. Some stakeholders want the ability to appeal tests. The subcommittee is looking at adding chromatography to ASTM 2169, or possibly developing a new ASTM standard for dessicant testing. The subcommittee has been unable to find data comparing argon to krypton fill to see if there is any difference for testing purposes.

The next IGMA conference will take place Jan. 23 to 26 in Clearwater, Fla