Glass Connections helps the industry deal with a shifting environment. 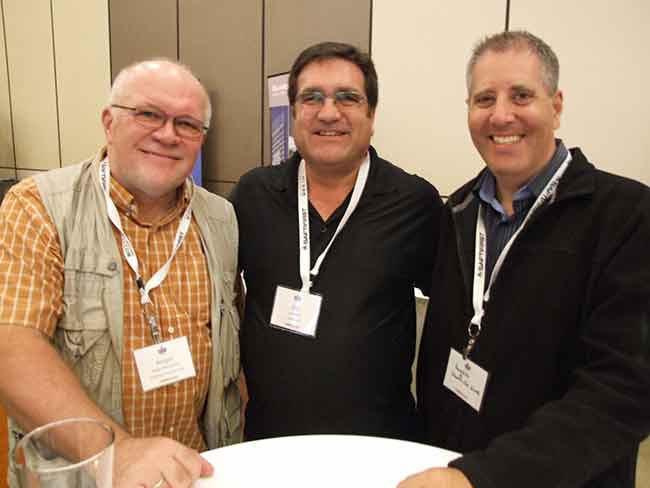 Everyone agreed Glass Connections was a great way to get together with some people you don’t see all the time. Here, Sergei Mihhailenko of Glazing Engineering hangs out with Jim Brady of Desa Glass and Angelo Cairo of Stouffville Glass.

The Canadian Glass Association hosted Glass Connections, its full-day educational conference, Sept. 13 and 14 at the Westin hotel in downtown Ottawa. The Annual Meeting of the CGA took place on the afternoon of the 13th, after which delegates were welcomed by a reception featuring some very tasty ribs, chicken, sliders and that perennial Ottawa favourite, beaver tails.

Everyone had a chance to lift a beverage with contractors, fabricators and suppliers from across the country that they don’t get to see very often.  Word went through the room that Chris Johnson of Lenmak had stepped down as president of the CGA and Jim Brady of Desa Glass has put his hand up once again to take the reins. Brady has promised an aggressive campaign to drive membership and board participation, and has initiatives in mind that he hopes will bring more resources to the association.

The event was ably coordinated by Bill Yanek, the out-going executive director. Yanek will be leaving his position at Centric Management for other opportunities, and administration of the CGA will be turned over to Sandy Mahoney. Yanek was thanked for his efforts and professionalism.

Codes and standards update
The education sessions kicked off on the 14th with a look at Canadian energy standards by Stanley Yee of Dow Corning, who is also president of the Glass Association of North America. Yee outlined the three approaches code authorities have taken for code compliance: prescriptive, trade-offs and performance. Prescriptive paths require contractors to provide facade and fenestration systems designed a particular way, using a particular set of components, in order to comply. The trade-off path lists energy performance requirements for various components of the building, then allows architects to specify lower-performing elements in certain areas as long as some other element offsets the penalty with higher performance. Whole-building performance paths place few or no requirements on how the building is constructed, as long as the whole building meets certain numbers for energy efficiency. These paths leave the most room for design flexibility and probably make the most sense from the perspective of actually reducing the amount of energy used. Yee predicts performance path compliance will continue to gain popularity and soon become the most common way energy standards are enforced in Canada. Jim Brady commented that new buildings in Calgary already have to have performance-path modeling done both at the bid stage and again before the building is released for occupancy.

Yee showed a chart mapping the stringency trend for ASHRAE since its inception in 1975 – buildings are now allowed to use half the energy under ASHRAE that they were allowed to use back then. Still, it appears that the industry has not had significant trouble meeting these challenges with technology. A U.S. Department of Energy study found almost 100 per cent compliance with energy code requirements in residential windows across six states. A study of commercial buildings by the same agency is planned.

Yee discussed the activities of the Glazing Industry Code Committee in influencing the decisions of the IECC at its recent update meetings. The GICC submitted successful proposals to increase allowable commercial skylight area, increase compliance flexibility, remove barriers to window replacement and tighten residential U-factor requirements. The GICC also successfully resisted a proposal that would have prevented highly glazed commercial buildings from complying with IECC energy requirements even if they showed compliant energy efficiency levels. Whole-building air-leakage test standards were approved. The GICC also influenced the IECC to reject proposals to require commercial buildings under two stories to meet residential U-factor requirements, to remove commercial shading credits and to eliminate credits for on-site renewable energy. In short, the GICC, which now includes members of the CGA thanks to its alliance with GANA, has helped to prevent numerous changes that would have negatively impacted the ability of architects to specify glass facades under IECC standards. As an international model code, the IECC influences building codes all over the world.

ASHRAE 90.1 update meetings are ongoing and Yee says the discussions have become much more inclusive of the glass industry viewpoint since North American associations rose up two years ago to resist proposals to further reduce window/wall ratios. U-factors and solar heat gain will likely be added to the requirements for fenestration components in the next round of changes.

Thoughts on sustainability
Mark Silverberg of Technoform delivered a thoughtful talk on sustainable building, giving some perspective on why the concept is important for the industry. One of the surprising points to come out of his talk was the revelation that, when the concept of “sustainability” was invented in the ‘80s, the need for economic profits was fully recognized as part of the philosophy. Silverberg showed how the original idea of sustainability was as a three-legged platform incorporating the environment, social considerations and economics. Turns out a sustainable proposal that eliminates or overly restricts the possibility of making money is not, in fact, sustainable.

Silverberg also presented data showing the importance of building envelope construction to the worldwide environmental movement. Several international studies have found that energy use in buildings is the most important contributor to climate change and depletion of natural resources worldwide, and that building envelope design and refurbishment represents the number one opportunity for sustainable development ahead of any other sector. To illustrate the point, he mentioned environmental targets in New York City that would require the refurbishment of more than a million buildings over the next 20 years. He urged delegates to look on sustainable building practices not as a threat to their way of doing things but as an immense opportunity.

Too much to cover here
Space prohibits going into similar detail about the rest of the talks – you really had to be there. Bruce Milley of Guardian discussed the evolution of flat glass production, giving delegates an inside look at the processes that produce the glass they use every day and the amazing technology that is used to coat it. Tim Nass of SaftiFirst informed delegates about the difference between fire resistant, fire protective and safety glass and how those three categories are treated in the codes. George Torok of Morrisson Hershfield discussed window wall and the common design and installation pitfalls that cause it to leak, along with recommendations for how to fix them. Larry Carbary of Dow Corning told delegates how his lab used finite element analysis to discover a better way of applying silicone in high wind-load applications. It has something to do with hyperelasticity.

About 75 delegates attended the event. The next Glass Connections is tentatively slated for Vancouver.