Features Community Under the Glass
Return of the entrepreneur

Borys and Hockham jump into ownership with Glass 8. 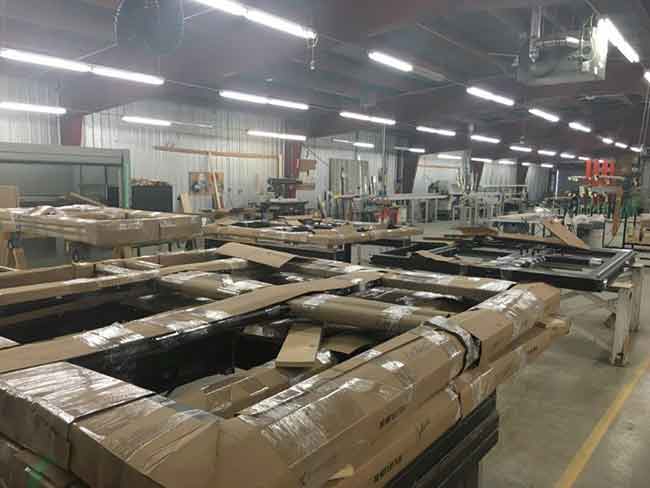 Glass 8 is producing full curtainwall assemblies in its 14,000-square-foot plant. Building envelope fabrication is only one of their four services.

There was a chocolate cake on a side table at the Glass 8 office at the eastern edge of Winnipeg. It said ‘Congratulations, Glass 8’ in blue icing. It was explained that the cake was a gift from a client. Not bad for a Thursday.

It’s not every day they have cake at Glass 8, although it’s still very early days at the office, run by Dean Borys and Michael Hockham and their 16 employees. Glass 8 is merely a few months old – Borys got it up and running in late 2015 and Hockham joined the team in early 2016 – and the cake was presumably a house-warming (or a business-warming) gift of sorts.

“The Glass 8 name is kind of a reference to Division 8, so it’s construction specifications; anything in Division 8 is generally opening related, windows related, so if it’s glass and Division 8, that’s what we do,” said Borys.

But this particular physical premises isn’t a stranger to the glass business. What is today Glass 8 used to be a business called Allan’s Glass, housed here in a long, one-storey office and workshop in St. Boniface’s light industrial area along Dugald Road. It was run by a man named John Borys.

“I know a little about Allan’s,” said Dean Borys, John’s son, before he corrected himself. “I know a lot about Allan’s, actually. I joined Allan’s Glass in 2001. It was a family business, owned by my dad. We were doing work all the way out to Saskatchewan, and Alberta, obviously Manitoba, Nunavut, Northwest Territories.”

John Borys had purchased Allan’s Glass in 1983 and by 2011, the family business was doing well enough that it was eventually approached by All Weather Windows, who inquired as to whether Borys would want to sell.

Said Borys, “We’d grown it quite substantially and it was a time for us to consider selling it, so we did. We sold it to All Weather and they kept the name Allan’s Glass. I stayed on to work with them in this building until 2014 and then they asked me to go to Edmonton and take on the role of director of their commercial division.”

That lasted until Borys got itchy feet for his entrepreneurial roots.

“It was a time for me that I thought, you know, I’ve done the small business entrepreneurial side until 2011. I want to try the corporate side of things. I thought it was a great opportunity. I learned a ton from it. I don’t regret it for a second. But it took a year and a bit for me to realize that I’m more truly entrepreneurial than corporate. And that was when I met with All Weather, it was actually late September, and let them know I was going to be leaving and simply because I need to get back and doing something more entrepreneurial.”

The timing, in retrospect, seems serendipitous; it was at about that time that Borys found out that All Weather wanted to offload their Allan’s Glass division in Winnipeg. Borys leapt at the chance, as did the employees, with 100 per cent of them joining the new company.

Hockham also grew up in the glass trade, also with an early start.

“I started as a very young boy in the glass trade, so I was maybe 12 years old, cutting glass in the evenings and helping family members with the family business on weekends,” Hockham says with his northern English accent (he was raised in Yorkshire, UK). “And then I started an apprenticeship at 16 and worked my way through the trade. So I’ve been around sort of 34, 35 years within the trade.”

Hockham left the UK 14 years ago and ended up travelling and consulting in a variety of places, including the Middle East and Thailand. His CV is littered with references to far-flung projects and places like Doha and Bangkok.

“It’s a great place for construction, and for our trade, it’s fantastic, with towers going up as far as the eye can see,” he said about working and living in Thailand. “It was a great experience for me.”

In terms of his Canadian life, it may eventually prove to be a little more stable than southeast Asia was.

“I was there during the red shirts civil war,” said Hockham. “It was a tough time 2010. A time and situation that prompted us to leave. We gathered bullet holes in the truck as we were trying to escape.”

In the space of several years, Hockham has gone from working in an environment with desert heat and sandstorms to a tropical one with monsoons and great humidity (and civil unrest). But he says that those aren’t nearly as impressive as the prairie climate with its thaw-melt cycles and potential 60 C swings of temperature.

“I’ve never seen it before. I’m used to fluctuation in temperatures, plus 50 in Qatar, and the dreaded Middle Eastern sandstorms,” he says. “It is a fantastic experience, but it doesn’t compare to what you have here. This is an anomaly for me. When I first arrived, I didn’t really know how to deal with it. Everything is completely wrapped with membrane and the fluctuations, from minus 30 to plus 30 C, is horrendous to work with.”

After Thailand, Hockham ended up in Canada with his family and was hired through a recruiter to work for another contract glazier before joining All Weather Windows, which is how he met Borys. Both insist that this new company wouldn’t have been formed without their partnership.

Says Borys, “I had told people that after we sold Allan’s Glass, I had no interest in coming back into the commercial glazing market as an owner, unless I could find a partner who complemented my skill set and kind of filled the voids in some places. So my role is the director of pre-construction, Michael is the director of operations. “

“(I deal with) everything from design, estimating, budgeting, that falls into pre-construction. So I’m working with clients, pre-award, at tender-stage and estimating. And as soon as we secure the contract, we turn it over to Michael’s team, who’s responsible for the execution of those contracts.”

But this story isn’t just about a couple of guys setting up a cozy neighbourhood business to take care of window damage from bird strikes and errant baseballs. They’ve got bigger plans than that.

“We’ve always talked about Glass 8 being really about four divisions,” said Borys. “We’ve sort of branded them all with 8s. Enclose8, Design8, Space8 and React8. So React will be our emergency division (with 24 hour service); Design will be our design-build consultancy – to architects, any type of information they need, we can source the suppliers. Space8 is actually interior space, and Enclose8 is our exterior curtain wall/entrance division.”

“One thing we’ve already secured is that we have a new interior partition product. Right now, the interior partitions that are sold across North America are generally a bit heavy, very component-heavy, and single-glazed,” said Borys. “The system that we’ve brought in, we call it Switch, is a double-glazed product, it’s fully modular, it’s relocatable. The customer can have an office looking one way and in a matter of hours turn it into two or three offices, and if they’re in a leased space, they can take it with them into the next leased space.”

“That’s our newest product; it hasn’t been seen before. Our agreement is directly with the European manufacturer. And we have Canada-wide distribution rights.”

Glass 8 is producing full curtainwall assemblies in its 14,000-square-foot plant. Building envelope fabrication is only one of their four services.

Added Hockham, “It’s great for a tenant-improvement package. Once the tenant’s in, if they can expand or, God forbid, they have to downsize, they can move and shift their office. They can have a boardroom or a smaller space very quickly.”

“That’s one of the main things, that because it’s modular, we can stock product here and have it ready to go in a matter of hours,” said Borys.

Hockham said that with Switch they will be “able to give the clients exactly what they want, the architects especially. A lot of products, once budgetary constraints are apparent, are value-engineered out. We believe we can get products into this market that offer architects exactly what they want simply due to us being able to source a better quality and fairer price.”

“There are lots of products out there, and they claim to be demountable and relocatable,” said Borys. “However, as Michael said before, they are very component heavy, very difficult to relocate. With this being entirely modular, very easily to relocate and double glazed, so you’re provided with a lot of acoustical value in a wall system.”

The pair insists that Glass 8 is not just about offering particular products but, rather, a different way of doing things and a different approach to their industry.

“I think one of the things we talked about, the vision that Michael and I discussed in the past, is that our trade as glaziers, we want to change the way the industry sees the trade of glazing, the perception,” said Borys. “Michael is from the UK, he’s worked all over the world, and outside of Canada and into Europe, the trade of glazing is a craft. It’s something different than it is here. And we really want to change that perception here, try to bring some of that craftsmanship here and really change the way the industry sees it.”

Hockham adds, “I believe there to be an unfortunately engrained negativity with certain construction trades here in Canada and the glazing industry is no exception. Delivery at field level by ‘in-house’ employed teams is so dependent upon structured project management and operational excellence. Companies all too often celebrate the award of a project, only to move on to searching for the next award. Sales are of course important to any company, but so is your deliverable to your client and good old fashioned ‘repeat business’ cannot be beaten.”

For now, though, the pair’s families still live in Edmonton, and the two will commute. They will be based out of their Winnipeg headquarters, attending to projects throughout Canada initially through the use of subcontractors before they build teams in other provinces.

“Allan’s only ever had one physical location,” said Borys. “They executed projects in different locations; it’s the same model for Glass 8. Even though our fabrication facility is here, the same way we will ship product up to Nunavut for installations, we will ship product into Edmonton, Calgary, Regina, Saskatoon, wherever our customers are.”

They have already lined up a number of projects, a new school here, a University of Manitoba project there. And if things go the pair’s way, there may eventually be even more Thursdays with cake at the office.