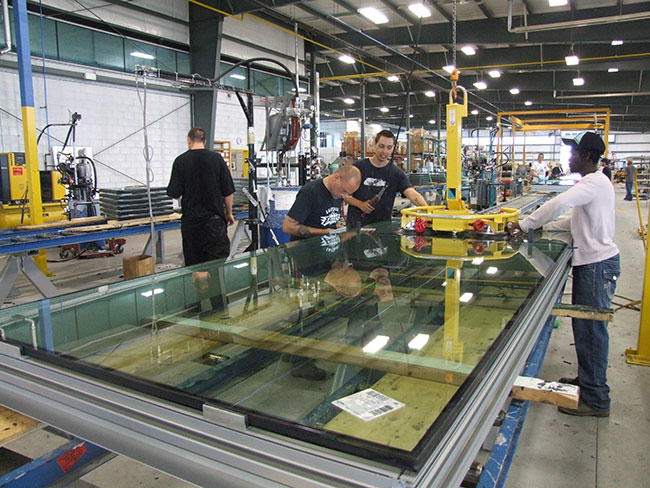 We can make facades that are airtight, waterproof and highly insulating. But do they actually contribute more to climate change through carbon released in their manufacture and fabrication? Soon, governments may force us to consider these aspects through regulations on embodied carbon in building components.

You’ve put in years of work and thousands of dollars (at least) developing and testing new products, sourcing new suppliers and learning new installation methods in order to meet net-zero building standards for energy efficiency. Your facades are now highly insulating and airtight. It was a strain on your business but now you are ready to meet the climate-change challenge for the decades ahead, right?

While there’s been an aggressive push to get buildings net-zero energy ready by 2030, discussions within code-writing committees have started to shift from a sole focus on operational carbon to a combination of operational and embodied carbon.

What does embodied carbon mean? It means that it doesn’t really matter where greenhouse gas emissions come from, it only matters that they are produced somewhere on the planet. If a factory in China produces greenhouse gasses fabricating the aluminum for your storefront, it’s just as big a problem for global warming as if the same amount of gasses were released by a power plant here in Canada.

Climate scientists have been saying for decades now that the embodied carbon created in the extraction and processing of raw materials, the fabrication of those materials into finished products, the installation of those products and the maintenance and replacement of them should all be factored into the ultimate “green-ness” of any project. Standards such as LEED have acknowledged this for some time. But now, governments are taking notice and are warning they will soon make measures of embodied carbon part of the standards that buildings have to hit to meet code.

How serious is the industry taking this?

Well, many building science consulting companies are already hard at work helping project owners figure out their environmental, social and governance scores and those builders are starting to ask manufacturers for their environmental product declarations.

Building Knowledge Canada has been working with contractors since 1986, offering them a range of services including energy efficiency design, development, performance modeling and program certifications; building performance diagnostics; and e-training and program development for industry partners addressing the latest building standards, owner expectations and trends, and the latest sales and marketing techniques.

Cooke says builders are uncertain what to do with these EPDs they’re requesting, but they are requesting them as they look to the future and to the 2025 National Building Codes being prepared.

“Nobody knows what to do with it yet, but we have builders who are already doing the counts, starting to look at it,” he says. “The forward-thinking builders, the largest builders, are thinking about, ‘Where are we now? What are people going to ask us to do?’ And they’re already setting up the manufacturers to say, ‘You better get me this.’”

Cooke says some projects are already requesting EPDs on even very minor items.

“I was asked the other day for the EPD for a little caulking that’s used around windows. Seriously, of all the things going on in houses, the last one you need is EPD for the caulking. But they’re basically saying, ‘Hey, I’m just checking the box, I want them all, eventually, so you better get me it,’” he says. “The window guys are going to need to step up and immediately offer their EPDs, and that’s going to be total. That’s the frame, that’s the windows, it’s the coatings, it’s argon. It’s, ‘I need your numbers to know where you’re at.’”

If embodied carbon becomes part of the new building codes, this could make builders hesitant to install triple-IGUs. Currently, the typical embodied carbon for a residential building is about 42 percent concrete, 19 percent brick, 12 percent insulation and windows are about five percent. If you add the third pane of glass, the embodied carbon from the windows will increase, so how these new building codes define carbon will be of great importance to the industry. In commercial buildings with glazed facades, the contribution of the glass will be much higher.

“Builders need to know the incremental number for the triples, because they need to decide whether it’s a good thing or a bad thing to put a triple in from the total carbon perspective,” Cooke says.

But how realistic is it for builders to be able to obtain the EPDs from all of the different suppliers they deal with around the world?

“The environmental guys are saying, ‘Start now, make them do it,’” Cooke says. “There’s already a couple of tools out there. Natural Resources Canada has created a tool and you absolutely can put in: Where did the product come from? How did it get here? And so, you put in a fuel factor, distance factor and so on.”

While these tools are still relatively new and will surely be tweaked and improved over time, Cooke says they can be used to perform carbon assessments today.

“There are people already doing assessments and not every manufacturer is on side. So, you either put in a default for that product, or you say, ‘We’re going to use a different product,’” he says.

True carbon value
While not every supplier in every country will be readily forthcoming with this information, it should be relatively simple for Canadian glazing contractors to figure out embodied carbon for their main building materials – aluminum, glass, sealant and gasket – because most of the products are supplied locally or somewhere in North America.

One individual in the building sector that has been praising the importance of understanding the true carbon footprint of a building is Chris Magwood, director of research and co-founder of Builders for Climate Action, a grassroots organization “born to actively transform our building practices to become climate positive as quickly and intelligently as possible.”

Magwood has been leading the development of the BEAM carbon estimator tool for low-rise construction. The tool started out as a spreadsheet he created to help him with his Master’s degree thesis project, “Opportunities for CO2 Capture and Storage in Building Materials,” while attending Trent University. Magwood’s tool uses EPDs and “transparent material take-off calculations” to determine biogenic carbon storage in materials.

Magwood now works with various levels of government to create embodied carbon benchmarks and regulatory programs. He also assists developers and builders with coming up with solutions for reversing climate change for their buildings.

“I think it’s really important. Without doing that, we don’t really have a sense of what the climate implications of our buildings really are. Because so far, we only really viewed it through the lens of operating emissions, but we’ve kind of completely ignored the material side,” Magwood says. “I’ve been researching and working on this for the last five years. For new Canadian construction, that material carbon footprint can often be the equivalent of decades worth of operational emissions. And so we can do all the work in the world to make zero-energy buildings. But if that building has a massive carbon footprint just to get made, then we’re not really helping the climate very much. So, I think it’s really important that we start really working on this.”

Magwood says the biggest challenge to making embodied carbon of new buildings a primary focus within the industry is getting people to understand the importance of this issue.

“Anytime I talk to a group of contractors or a government audience, actually making it clear how big a deal this is is the first step. It really surprises people to understand the scale,” he says. “I don’t think there are any major roadblocks to eventual inclusion in the code. It sort of requires all the same steps that energy efficiency required over the last 20 years to figure out: what to agree on; how we measure it; agree on the tools that we use to do that; agree on what reasonable limits are; and sort of ratchet those down over time.”

Magwood says his studies have shown that builders can make substantial reductions in the carbon footprint of a new building while still incorporating the use of some high-emitting products.

“Concrete is a relatively high emitter. So is steel and so is glass, But, if you’re smart in your choice of other materials, you can make a building with a very reasonable carbon footprint that would meet all of our current climate targets without having to say, ‘Well, you can’t use concrete, and you can’t use steel, and you can’t use glass, which isn’t really possible or fair to those industries. So, I haven’t really seen much opposition to a sort of whole-building approach.”

Sounds like it’s time to take a hard look at the embodied carbon inherent in our supplies and processes. •