Features Business intelligence
Surveying the wasteland: Reports reveal the extent of COVID damage across the country 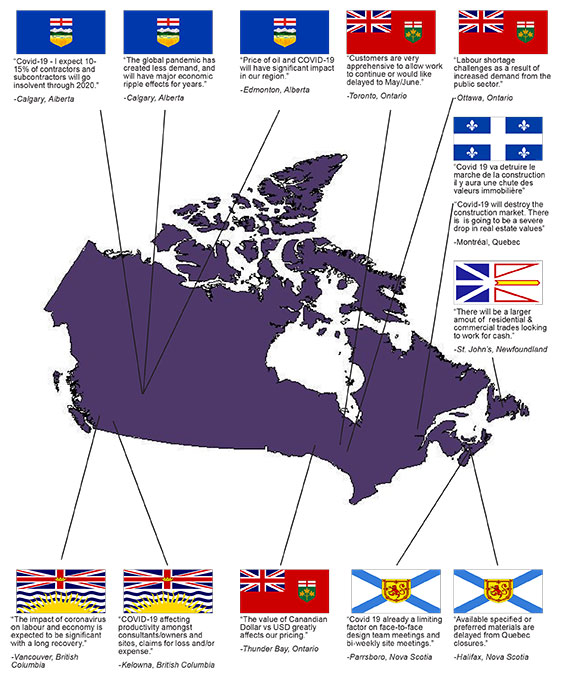 Different regions have experienced the pandemic differently. The West has been hard-hit by the concurrent collapse in oil prices. Ontario and Quebec have had the most severe lockdowns. Atlantic Canada seems to have fared best, though things may not be over in Nova Scotia yet. Photo credit: RICS/CIQS

Surveying businesses and issuing reports on the devastation caused by COVID-19 is practically a market research segment unto itself now, and Canada’s industry is no different. Two reports, one from the Ontario Construction Secretariat and one by RICS and the Canadian Institute of Quantity Surveyors cast significant light on the initial impact of the lockdown implemented by provinces to slow the pandemic.

The OCS surveyed 200 ICI contractors between April 22 and 29. Here’s what they found.

Ninety-eight per cent of contractors have been impacted by the coronavirus to some extent, with more than half (52 per cent) reporting that most or all of their work has stopped. When it comes to how much of their work has been impacted, contractors report on average that 64 per cent of their existing work has stopped, and 65 per cent of their upcoming work has been delayed. Supply chains have also been affected by the coronavirus, with 63 per cent of contractors reporting medium to high impact. Contractors’ biggest concern right now is ensuring the health and safety of their workers and staff, followed by global recession and workforce productivity. Other prominent concerns include supply chain disruptions, keeping their firms in business, and their ability to meet contractual deadlines.

Contractors reported on average that Ontario’s April 3 shutdown order impacted 62 per cent of their construction activity. Sixty-three per cent of contractors agreed with the province’s decision to shut down parts of the construction industry, 22 per cent disagreed. Under current restrictions and with current government supports, 16 per cent of construction firms expect they would go out of business within three months, another 28 per cent would go out of business within three to six months. So far this year, 83 per cent of contractors report that their revenue is down compared to the same point last year. On average, revenue has declined by 42 per cent. The majority of construction firms (56 per cent) expect that to stay in business, but they will need government support.

The most common actions taken to lower the risk of coronavirus spread on construction sites included encouraging more-frequent hand washing (88 per cent); increasing availability of hand sanitizer and hand-washing stations (85 per cent); and establishing a procedure that allows workers to call attention to unsanitary conditions (84 per cent). About three-quarters (74 per cent) of contractors have laid off construction site workers, while 42 per cent have laid off office staff. Fifty-five per cent of contractors have applied for government assistance, and 30 per cent have taken out loans as a result of the coronavirus economic disruption.

The Q1 2020 RICS/CIQS Canada Construction and Infrastructure Survey took data out of a global survey that collected 1,323 responses from a broad cross-section of construction companies. It’s findings look at the construction sector generally, with a regional breakdown.

Respondants are inevitably reflecting the impact of the spread of the pandemic in their feedback. Fears about implications for economic activity have deepened, and despite a huge array of government fiscal interventions (worth in the region of 14 per cent of GDP), the recovery process is likely to prove quite protracted. The suspicion that the legacy of the pandemic will cast a shadow over the construction and infrastructure sectors for some time to come is evident in the forward-looking metrics contained in the survey. Workloads are anticipated to remain subdued over the next 12 months, with employment projected to drop and, most notably, profit margins viewed as coming under pressure. In net balance terms, the headline reading for the latter has turned around from plus-28 to minus-32 as concerns have grown about the pricing environment in a more challenging market.

Despite the overarching shift in the narrative regarding the delivery of construction and infrastructure projects for the time being, shortages of skills and labour more generally continue to be highlighted as obstacles to activity by contributors to the survey (with the inference that they will again be relevant when the lockdown ends). That said, the proportion of respondents signalling concerns about these issues has diminished somewhat since the end of last year. For skills, the proportion identifying this to be a problem has dropped from over 60 per cent to less than 50 per cent. And for the wider category of labour, it has slipped from just under 60 per cent to close to 40 per cent.

Predictably, insufficient demand is now viewed as more of threat with an increasing number of responses noting material shortages as a barrier. Financial constraints remain an ongoing theme although encouragingly for now at least, this issue doesnt appear to be worsening.

There is a substantial disparity in conditions based on geography. In net balance terms, workloads in the prairies and territories contracted at a much quicker pace than in other parts of the country. The bulk of respondents in this region are based in Alberta and also dealing with the fallout from the collapse in oil prices. This dynamic is mirrored in other metrics, most notably expectations for tender prices and construction costs, where deflation appears to be a signficant risk.

B.C.
Participants in the first-quarter survey from British Columbia noted a sharp reversal in activity. After reporting increasing workloads in all sectors (including infrastructure) in the fourth quarter of of 2019, construction market activity was said to have contracted, albeit modestly, at the start of 2020. There are some signs that this will persist in the near term with new enquiries and new workloads contracting, as delays in payment are rising. There does not yet appear to be a significant reduction in headcounts, however.

Contributors appear to believe that it may get worse before it gets better. Workloads (both infrastructure and non-infrastructure) are expected to contract over the next 12 months, as headcounts are trimmed and profit margins deteriorate.

Ontario
Although respondents in Ontario saw a significant slowdown in construction market activity during the first quarter, they were more upbeat than in many other parts of the country. After reporting an increase in workloads across most segments of the construction and in the fourth quarter, the market appears to be in somewhat of a ‘holding pattern,’ with activity neither increasing nor decreasing. This also appears to be the case with the pipeline of current demand. Contributors reported little change in new business enquiries, new workloads and headcount. However, repair and maintenance workloads declined while delays in payment increase, perhaps serving as warning signs for the industry. Amid the uncertainty of how the COVID-19 pandemic will play out, workloads and headcount are currently expected to be little changed over the next year.

Prairies and territories
An already difficult market environment in the prairies and territories appears to be made worse by the COVID-19 outbreak and subsequent collapse in oil prices. Contributors noted that workloads across all segments of the market, including infrastructure, contracted sharply to start 2020. This is likely to persist given that new business demand and fresh workloads are also contracting at a quicker pace (in net balance terms) than what was reported in the fourth quarter. Meanwhile, payment delays are rising. A lack of demand, financial constraints, and competition appear to be driving the contraction. Companies appear to have begun to trim headcounts, which is expected to continue over the next year as workloads contract and firms see a significant deterioration in profit margins.