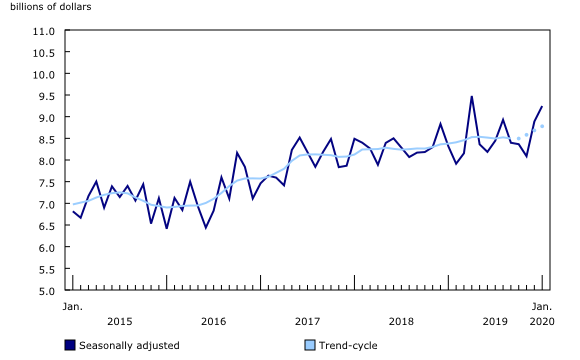 The total value of building permits issued by Canadian municipalities increased 4.0% to $9.2 billion in January. Increases were reported in six provinces, led by British Columbia (+52.1% to $2.2 billion).

Change in Vancouver’s development costs drives growth in British Columbia and nationally
The majority of January’s national increase in the value of building permits was in British Columbia (+$751 million), largely due to the census metropolitan area (CMA) of Vancouver. The value of permits increased in the CMA of Vancouver by 81.8%, prior to increases in development fees, which came into effect on January 15. Meanwhile, Quebec (-$366 million) and Ontario (-$161 million) reported the largest provincial declines after strong activity in December 2019.

Despite increases in seven provinces, the value of commercial permits decreased 0.8% to $2.1 billion, with Quebec reporting the largest decline (-$249 million).

The value of industrial permits offset some of the non-residential decline, rising 6.8% to $682 million, led by Ontario (+$90 million).