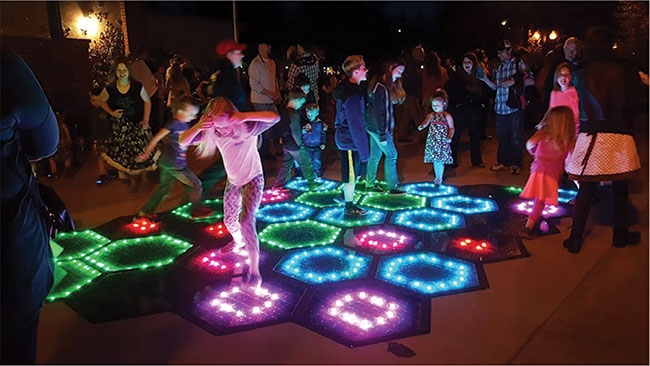 As with other technologies in their relative infancy, it seems that progress in getting the efficiencies of photovoltaics higher – and the costs lower – is painstakingly slow. The mechanics of a PV cell are simple enough (photons of light strike two layers of a semi-conducting material, causing electrons to jump between them, which are then caught by electrodes), but innovation and out-of-the-panel thinking may be accelerating both the cost decreases and efficiency boosts.

One new area of solar technology is known as “building integrated photovoltaics,” which, as the name suggests, relate to building facades and even interiors. Companies are using thin films (ultra-small solar cells) as well as traditional PV cell technology to turn windows, glass block, plastic rolls and other building elements into power-generating devices.

Most thin-film PV modules have both front and backside glass, explains Greg Wilson, director at the Materials Applications and Performance Center and co-director at the National Center for Photovoltaics, both located at the U.S. government’s National Renewable Energy Laboratory in Colorado. The thin-film technology that is currently the most commercially successful employs cadmium telluride (CdTe) as the semi-conductor, but Wilson notes it only has a market share of about five per cent compared to traditional silicone solar panels, which hold over 90 per cent of the solar PV market. While efficiency for silicon is as high as 22 per cent at present, CdTe efficiency is catching up and is now approaching 18 per cent.

There is a small portion of the silicone PV module market that also uses glass on both sides of the module and includes either organic cells (tiny solar cells within or on the glass) and dye-sensitized solar cells (DSC, where the semiconductor material is placed directly on the glass). “The latest thin-film PV technology in the laboratory involves a variation on DSC technology that now goes by the term ‘perovskites,’” Wilson explains. “These cells have created a great deal of excitement in research labs, but because they do not last long in real outdoor applications most believe it will be many years before they penetrate the outdoor PV panel market.” Wilson believes organic cells and DSC technology could get traction in indoor light-scavenging applications and for windows that scavenge indirect light through the use of low-efficiency PV layers.

Looking at the economics, Wilson notes that PV panel costs have dropped dramatically over the last few years because of both global oversupply and technology advances. The lowest-cost panels per watt of power produced are generally silicone panels that have a multi-crystalline structure and CdTe panels, Wilson explains, with both being currently sold in the U.S. through high-volume contracts at or below 35 cents [all figures in U.S. currency] per watt. However, he explains that “what really matters is the cost of the electricity that is produced from the entire system, and here too costs have come down dramatically. In the sunniest parts of the world, large PV ground-mount systems built by the most competent installers now produce PV electricity for less than three cents per kilowatt hour without subsidy. In the U.S.A., the costs vary by region but even in New England or northern Minnesota, PV generation costs for ground-mount systems are now around six to seven cents per kilowatt hour without subsidy.” He reports that the U.S. Department of Energy believes that ground-mount PV costs in these areas will come down to three to four cents per watt over the next ten years.

Wilson also reports that storage costs (the addition of large lithium-ion batteries to a solar system) could fall as low as one cent per kilowatt hour in the next five to 10 years. “Today the lowest-cost storage is from what is called pumped hydroelectric plants and the additional cost of storage is already around two cents per kilowatt hour,” he notes, “so even in the southern parts of Canada, PV has the potential to become a mainstream source of electricity over the next decade.”

If Wilson is right, PV panel production may soon be coming out of the doldrums it entered in recent years, as government subsidies for solar power are no longer necessary to make the technology a viable power source. Glass fabricators, take note.

New commercial tech
Solar Window Technologies of Columbia, Md., uses ultra-thin layers of transparent liquid coating (made of mostly hydrogen and carbon) on glass and flexible plastics, which converts sun and artificial light to useable electricity while retaining about 20 to 60 per cent visible light transmission. Spain-based Onyx Solar also offers electricity-producing coatings on a number of glass products, including windows, spandrels and curtainwall. Physee of the Netherlands is yet another thin-film solar energy company, offering its double-paned PowerWindows. They have a film made of industry-standard crystal and three-per cent transparent luminescent solar concentrators (TLSCs) that have been installed in pilot projects on several large buildings this year.

In 2014, professor Richard Lunt and colleagues at Michigan State University invented a transparent TLSC of organic salts and have been working to boost its low efficiency. The salts absorb specific wavelengths of ultraviolet and infrared light, then luminesce in another infrared wavelength which is detected at the edge of the unit and converted into electricity by thin strips of conventional PV cell.

Oxford Photovoltaics is yet another solar coating company, a spinoff founded in 2010 by scientists from the University of Oxford in the U.K. The technology employs perovskite in a multi-junction/tandem architecture, and the firm claims “perovskite materials have astounded the solar cell community with a steep rise in efficiency from about four per cent in 2010 to a certified efficiency of 20.1 per cent in 2014.”

Similar is the invention of researchers at the University of Alberta. A team headed by Jillian Buriak, a University of Alberta chemistry professor and senior research officer of the National Institute of Nanotechnology, have developed a spray-on coating from zinc and phosphorus that can be applied to various plastic surfaces, from tents to clothing to buildings. The technology could also be manufactured in roll form and simply unrolled in a sunny spot for instant power generation in disaster or camping situations.

An organic cell product produced in flexible polyester rolls is HeliaFilm, produced by Heliatek, a spinoff company founded by scientists of the Technical University of Dresden and the University of Ulm in Germany. HeliaFilm can be installed over glass, concrete, steel and many other materials. To produce one square metre of HeliaFilm, only one gram of organic material is needed and the process temperature required is only 120 C. In 2016, the company reached an independently confirmed efficiency of 13.2 per cent, thanks, it says, to the excellent properties of its organic semiconductor and its three patented light absorbers, each dedicated to efficiently converting green, red or near-infrared light into electricity.

Other solar glass developments
In October 2017, Solar Roadways installed its first pilot project in a pedestrian area in the firm’s hometown of Sandpoint, Idaho. The firm’s solar panels are topped with a special tempered glass, which it claims can support the weight of transport trucks and has a traction similar to asphalt. The company has completed three research contracts with the U.S. Department of Transportation, the third being a two-year $750,000 contract that came to an end in November 2017 that involves panel exposure to freeze-thaw cycling, moisture, shear testing and heavy truck use. At the pilot pedestrian site, the 30 hexagonal panels sport both LED lights and snow-melting heating elements. However, other recent Solar Roadway demo projects have reportedly suffered breakage and even a fire. These failures have spurred critics to claim the technology is unreliable in addition to being too costly, with an efficiency and light absorption that is very low because the panels are flat and do not track the sun. Critics also believe light absorption will diminish over time due to dirt accumulation.

Build Solar, a company formed by scientists from the University of Exeter in the U.K., will begin selling their Solar Squared glass blocks in 2018. These blocks contain traditional silicone PV cells. While the firm will not provide efficiency information, it states that their blocks are meant to replace conventional glass block used in building walls and not to replace solar panels. Solar Squared blocks provide daylighting, electricity production and have better thermal insulation than traditional glass block.

Another firm that will not provide efficiency information is Tesla Solar Roof, which is a sister company to the Tesla electric car maker. These roof tiles feature traditional silicone PV cells with tempered glass warrantied against hail damage. The tiles feed a Powerwall battery that makes electricity available for immediate use and prevents outages when the external grid goes down.

“The different technologies are developing very fast,” notes Andreas Athienitis, a professor in the department of Building, Civil and Environmental Engineering at Concordia University in Montreal. “I believe several will be cost-effective in Canada in a few years when properly integrated into building design,” he says. “Standards and design techniques for their integration into building design and operation need to be developed.”