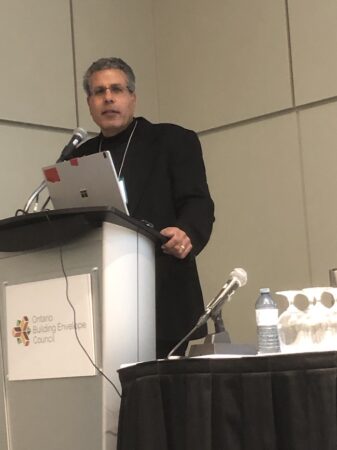 The Buildings Show in Toronto’s Metro Convention Centre boasted some good energy on the show floor and some really outstanding education seminars of interest to commercial glass people. The sessions make the visit worthwhile to a show where only a small portion of the vendors on the floor are glazing-focused. The vendors that were there reported some of the best traffic they’d ever seen. The Buildings Show is presented by Informa Connect and ran Nov. 30 through Dec. 2.

Here’s a look at some of the sessions with architectural glass interest:

The title coyly concealed the compelling and fascinating hook for this session: an incredibly in-depth look at the replacement of the famous Eaton’s Centre skylight in downtown Toronto with involvement from some of the same architects that designed the original in the ’60s. It’s impossible to do the presentation justice here, but the technical innovations and installation challenges over an open shopping mall had me, at least, on the edge of my seat. Crosby and Collins started with the wear-and-tear that made wholesale replacement necessary, including clouding of the glass, failed seals, the presence of not-to-code wired glass and corrosion and degradation of the framing members. An idea to simply put new glass panels in the existing frame was scrapped as like-for-like glass would have been too expensive and installing larger glass panels would have lost the iconic barrel look. New, thermally broken pressure caps were designed to avoid having to wet glaze. Fittings and point supports were designed to be smaller and less obtrusive and also thermally broken. Heat sinks were added to the underside to collect heat from the building and prevent condensation. Collins and Crosby showed that the inside of glass temperature went from 33 C on the old lites to 26 C on the new ones. Structural redundancies were eliminated to allow for fewer cross braces and a more open look. The mullion caps were redesigned with a rainscreen concept to prevent water pooling outside, which of course had been responsible for much of the clouding and seal degradation. The old design included mechanical smoke vents designed to open in the event of fire – the new ones are less visible and can also open to let in fresh air and help with interior climate control. The glass provided by Seele was really beautiful with no distortion or roller wave even on the very large panels. There was a lot more. On every point, the duo went into exhaustive detail and one had the impression they could have gone on much longer. Two very impressive professionals with an amazing technical glazing achievement to talk about.

Albert Bicol is a building engineer on a mission. His passion for driving environmentally friendly construction is strong, though he admits to some fatigue in delivering the message again and again and seeing what he feels to be insufficient response from the industry. Bicol’s main message was that net-zero construction is so easy and inexpensive to achieve in Canada that there is no reason why designers should not use net-zero as a baseline assumption for their designs and only move to less efficient designs if demanded by their clients. Bicol reported that his own firm includes a free net-zero version of every design commission they get, whether the client asks for it or not.

Building for net-zero performance is particularly easy in most areas of Canada, Bicol said, because so much of our power supply comes from non-emitting hydroelectricity (and nuclear in Ontario, but Bicol didn’t mention that). That means only seven percent of the energy a Canadian building uses creates carbon emissions that need to be offset in order for the building to be considered net-zero. So if a building adds solar panels that provide seven percent of the power it needs…job done. Bicol showed a poll that asked architects why they didn’t specify net-zero designs. Forty-six percent said they didn’t have the skills, 31 percent said such designs are too expensive and 23 percent said they were not aware of net-zero (!?). Unsurprisingly, Bicol was not satisfied with these answers. He expressed impatience with the idea that designers should wait for governments to mandate high-efficiency buildings and called on the industry to lead the way by simply taking net-zero building as a default assumption.

Bicol then shared overviews of many net-zero building projects he has been involved in. He emphasized that he prefers passive systems for heating and ventilation rather than mechanical and showed several examples of these, including buildings designed to channel air through central breezeways; buildings with wind towers designed to create an updraft pulling air up and through the main structure; and buildings with carefully designed shading and orientation to make the best use of solar heat and evening cooling.

The controversy over window-to-wall ratio continues to simmer in the architecture world, with many policy makers and standards-writers assuming fewer windows and less glazed area must be better for energy performance. Ibrahim poked some holes in that assumption with facts and figures showing it ain’t necessarily so. In one example, he showed how a brick facade with a cut-in corner created such an intense thermal bridging effect that the effective R-value of the wall was as low as 4.7 – well below what even a middling-performance glazed facade can achieve. Ibrahim felt incentives in government and the industry are counterproductive to real energy-efficient construction. Thermal bridging from balconies is ignored in codes. Solar heat gain is misunderstood and not regulated properly; in some cases, less-insulating glass could be beneficial in reducing heating demands. Ibrahim felt that concern over energy loads from air conditioning is often overblown. Exterior shading could be an important contributor to energy efficiency, but North American tastes don’t like it. Ibrahim took aim at some other items of energy-efficient construction orthodoxy. He is against trade-offs, asking why, if the goal is to build the most energy-efficient building possible, a builder is allowed to make it poorer-performing in some area if it performs better in another. He’s also skeptical about the importance of embodied carbon calculations, pointing out that embodied carbon captures emissions that occur once during the building phase then cease, while operational emissions continue throughout the life of the building. Ibrahim pointed to work by University of Toronto building science professor Ted Kesik showing that a typical condo apartment could be brought up to net zero performance with $10,000 in upgrades to its specifications – an almost invisible cost over the life of the unit’s financing. So why isn’t it happening?