A look at BIPV development in Canada 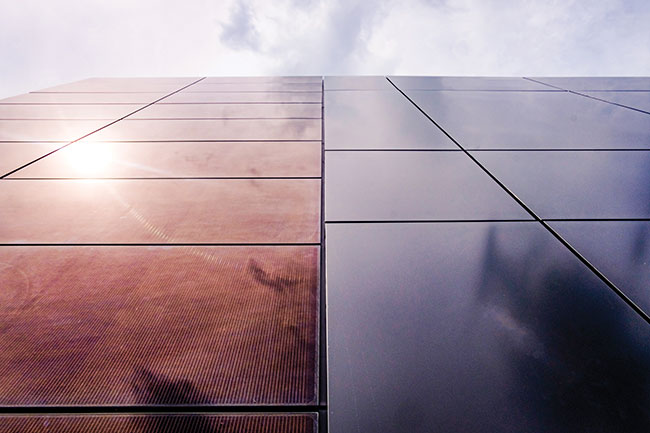 Elemex has installed its Solstex solar facade system at multiple projects over the years. In 202, the system was installed at EllisDon’s office in London, Ont, which was re-clad with over 1,200 square feet of Solstex and generates approximately 17,500 kilowatt-hours over electricity annually. All photos courtesy of Elemex

Canada has pledged to make all new buildings net-zero ready by 2030. Certainly these buildings will be much more energy-efficient and save significant amounts of carbon emissions. But the “zero” in net-zero assumes a building is producing some form of energy to run its internal systems, and solar energy is an excellent option to achieve this.

Enter building-integrated photovoltaics. The energy efficiency needs of future buildings are driving new levels of interest in this technology.

“The BIPV market is definitely growing,” says Haris Mohsin, marketing manager for Toronto-based Mitrex, which claims to have the world’s largest BIPV manufacturing facility. “When it comes to solar energy, people just think of those regular solar panels or PV glass with solar cells. Our challenge is only to educate people. When people get to know about it, they mostly get amazed, and then it’s a no-brainer.”

BIPV can be used in any construction materials exposed to the sun from shingles, windows, cladding and skylights, to pergolas and balcony railings. Various backing options allow for the panels to be incorporated on any structure. A building’s location, cardinal direction, orientation of the facade (if a facade is involved) and time of year all affect the amount of electricity that can be generated. BIPV use is now involved in LEED certification.

Like Mohsin, Leah Morise, marketing manager at Elemex Architectural Facade Systems, also says the BIPV market is booming and that education is important at this point.

“The pipeline is building, as is the interest in the marketplace, and we expect our traction and success rate will continue to increase sharply in the years to come,” she says. At the same time, she notes that “it’s very much an emerging market that requires a considerable amount of education and training across the multiple channels that exist within the process of completing a project.”

Morise says architects require information with regards to design, the flexibility of the facade and how to seamlessly integrate BIPV facade systems with conventional facade materials such as glass, ACM/plate, stone and sintered ceramic. “In addition to this,” she explains, “building owners and general contractors need to fully understand costs and ROI, but installers can install these panels in the same fashion as most pre-fabricated panels, which makes BIPV install a relatively smooth transition.”

The cost of BIPV compared to standard products is project-dependent, says Morise, and varies depending on colour, customizations in size and finish, panel layout, size of panel and location.

Mohsin notes that not only is the cost of the Mitrex BIPV construction materials (i.e. facades, glass, siding and roof) almost on par with their regular counterparts, “in fact, after a few years, the building actually produces free energy. And in some high-rise and bigger projects, more than enough energy that building owners can share that energy with the grid.”

According to Mohsin, governments around the world are also throwing support into incentives and otherwise encouraging the use of BIPV and other renewable energy building technologies.

Adoption factors
Morise agrees that sustainability requirements promoted at the provincial and federal levels – along with a desire from building owners to promote sustainability in their designs – will be a factor in speeding adoption. Mohsin points out that net-zero buildings will be required in new construction by 2026 in Washington, D.C. These codes will cover all commercial, condominium and apartment buildings, as well as single-family homes over three stories.

In that vein, Morise notes that for high-rise and multi-unit residential buildings that do not have a large footprint, BIPV systems are particularly well-suited in terms of productive electricity generation because there is more square footage on the walls than the roof.

She says overall that “what will likely continue to increase the number of BIPV projects in the market is the ever-growing knowledge that BIPV is an option for most facade applications, along with the continuation of successful installations and our ability to bring the designer’s concept to life.”

Indeed, the only hurdle in adoption of BIPV, says Mohsin, is that building owners don’t want to compromise on the esthetics.

Mitrex tech and projects
A Mitrex solar facade has many layers: a customizable outer facing layer (transparent is also available) of tempered glass with an anti-reflective and anti-soiling coating, the solar cell, cell backsheet, foam layer, aluminum honeycomb, galvanized backsheet and frame. The average output is around 16 watts and the weight is around 2.2 pounds per square foot.

The company offers other products, including solar glass and solar roof. In March, Mitrex launched Solar Brick, a solar-integrated facade cladding that produces up to 330 watts per panel while, as the name suggests, recreating a traditional masonry brick look. It can be used for new construction or retrofits through re-cladding or over-cladding. The ROI of an average Mitrex BIPV system could be as little as three years for a high-rise, the company says.

One recent project of note started in January, when Mitrex began installing Ontario’s largest BIPV wall at its head office in Etobicoke, Ont.. It is over 7,000 square feett and will produce 90,000 kilowatt hours of power annually. Three different colours of Mitrex solar facade variants are being used with a combination of stone cladding.

In April, Mitrex (with partners EllisDon, Dillon Consulting, DSRA Architects, Markland Construction and BMR Structural Engineering) began retrofitting the student residence at St. Mary’s University in Halifax with an integrated solar facade, making it the tallest and largest BIPV micro-grid application in North America. It will supply electricity to the residence and also to the grid as desired.

The south facade will have over 6,000 square feet of solar cladding, accented by vertical, semi-opaque solar glass integrated into the windows. The design of the cladding panels will be a combination of school colours with a subtle reveal of the solar technology to add a modern look.

With Canada’s new pledge to make all new buildings net-zero ready by 2030, builders and companies are looking for ways to enhance energy efficiency and reduce the carbon emissions from new builds. BIPV facades offer tangible solutions to the energy-efficiency needs of future buildings with solar-power generation built right into the structure’s facade.

Elemex tech and projects
The Solstex Solar Facade System generates up to 17.6 watts per square foot, and ROI could be achieved in 10 years. It weighs an average of 4.5-pounds per square-foot.

The system has a pressure-equalized rainscreen that reduces the pressure difference across the cladding through the use of compartmentalization and back venting. Ingress of incidental water is reduced and residual moisture is returned to the exterior at the drainage plane. Elemex has added 10 new colours that allow architects to expand their design options.

In 2020, EllisDon’s office in London, Ont., was re-clad with Solstex. Over 1,200 square-feet were installed, which generate approximately 17,500 kilowatt hours annually.

Other BIPV offerings
Technology for transparent PV-coated windows is being developed by Next Energy of California. Their solar heat gain co-efficient has been compared to that of conventional windows, and was found to have the potential to reduce the solar heat gain from a similar window to under .20.

Onyx Solar of Italy also makes BIPV with layers of heat-treated safety glass which can provide the same thermal and sound insulation as conventional architectural glass, and can replace conventional glass on building facades, curtain walls, atriums, canopies and terrace floors, among other
applications.

Heliene, based in Sault Ste. Marie, Ont., makes solar PV modules containing light-polarizing polyurethane backsheets and bifacial PV cells for greenhouses. The bifacial PV cells convert to electricity both sunlight from above and some types of UV light reflected by the backsheets. The backsheet also enhances transmission of red and blue wavelengths which have positive effects on the growth of the greenhouse plants.

Kuby Renewable Energy based in Kamloops, B.C., and Edmonton, Alta., also offers BIPV. Projects include a five-storey residence at Red Deer College that’s covered with solar glass cladding on three sides and the glass skylights of the atrium at the Edmonton Convention Centre.

Looking forward
Like any technology, BIPV will improve in the years to come. “One can only expect that efficiencies will eventually increase,” says Morise.

Looking ahead at what may emerge in the marketplace, she adds that “we may see the need for varying attachment types that will allow for angled panels and more complex design expectations.” •