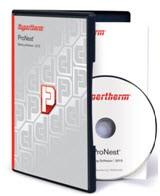 May 21, 2014 – Hypertherm has announced a major version upgrade to its ProNest advanced CAD/CAM nesting software for automated cutting.

May 21, 2014 – Hypertherm has announced a major version upgrade to its
ProNest advanced CAD/CAM nesting software for automated cutting. ProNest 2015 contains a number of improvements designed to make the software more efficient and easier to use. Some notable features include:

· An automatic nesting process called IntelliChoice that makes advanced level nesting decisions based on the available parts in the part list.

· Simplified and intuitive user interface that more closely aligns with the look and operation found with commonly used business applications.

· Tabs to quickly navigate between nests, insert new nests, or reorder nests by clicking and dragging tabs to the desired location.

· The ability to export nests directly to a DXF file without installing a special DXF Polyline setup or changing machines.

· More standard features such as OneClick, a powerful production module that automates various job tasks, and Custom Remnants, a tool that allows users to enter the dimensions of an irregular plate or remnant and then complete a nest. Formerly, those two modules were sold separately.

Hypertherm is also releasing major version upgrades to its TurboNest intermediate-level nesting software and NestMaster™ entry-level nesting software. These updates contain a number of the new features found in ProNest 2015. Along with the advanced features, Hypertherm’s new CAD/CAM nesting software continues to integrate advanced functionality with an easy to learn and use interface. Current subscribers can upgrade to the new versions at no additional charge and receive unlimited technical support.