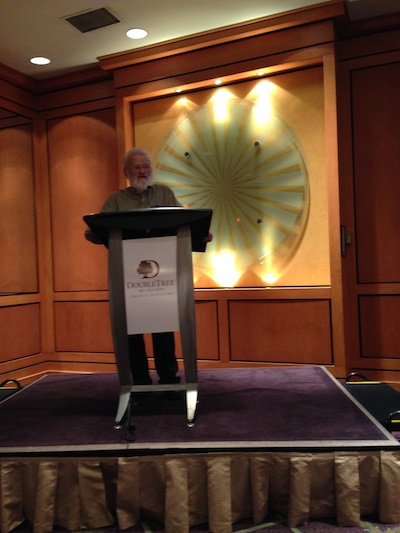 Sept 26, 2014 – The Glass Association of North America
continued its fall conference at the DoubleTree by Hilton Hotels
Downtown in Toronto on Sept. 24 and 25. About 100 delegates from over 50
member companies attended. The conference marks GANA's 20th anniversary
in its present form and the first time the association has held a full
conference in Canada.

Sept 26, 2014 – The Glass Association of North America continued its fall conference at the DoubleTree by Hilton Hotels Downtown in Toronto on Sept. 24 and 25. About 100 delegates from over 50 member companies attended. The conference marks GANA's 20th anniversary in its present form and the first time the association has held a full conference in Canada.

The Decorative Division chaired by Marc Deschamps of Walker Glass convened on Sept. 24. Delegates discussed the potential for weakening of glass when ceramic frit is applied and how to quantify this and communicate it to the industry. A task group was formed to generate a Glazing Information Bulletin on cleaning acid-etched glass, which is something professional glass cleaners have been asking about. The mirror technical committee is working on an update to mirror breakage standards, especially standards for mirrors with organic coated glazing. Proposed new standards from Europe may be hard to meet with the materials and thicknesses common here. The NeoCon committee reported strong growth in interest in glass at the Chicago interior design show and recommended GANA's continued involvement. Committee chair Mandy Marxen of Gardner Glass Products said fabricators should consider exhibiting at the show and bring their most creative designs. The education committee will look at shortening its overview presentation on decorative glass and developing separate in-depth presentations on each decorative category (frit, laminating, acid-etching etc.) to complement it. The division discussed the possibility of getting involved with standards for bath and shower enclosures, but it was felt that this would be more appropriately left to bathroom contractors with input from a GANA task group. The division also had little interest in getting involved in daylighting clauses within LEED version 4.

Michael Mesure of FLAP Canada raised awareness of the importance of bird-friendly facades over lunch. Preventing bird collisions with glass is not as straightforward as it seems and many common ploys do not work. Plastic owls are useless, Mesure reported, as are hawk-shadow decals. Angling glass and planting trees very close is also ineffective. Bird-friendly glass products on the market are still of limited effectiveness because designers have not yet discovered the correct frequency of ultraviolet light that is most visible to birds. Mesure said marking the glass is still the only proven solution, and markings need to be spaced no more than two inches apart horizontally and four inches apart vertically. The markings also need to be put on surface one of multi-lite units or else the window will still reflect enough to attract birds. Mesure pointed out that protecting birds is now a matter of law in Canada, where building owners can be held criminally responsible if their buildings cause the deaths of endangered species. The good news is properly marked windows will reduce bird strikes by 70 per cent or more, and buildings so marked will not attract prosecution for the owners when birds do hit them.

Valerie Block of Kuraray chaired the laminating division meeting and reported on progress in developing a deflection table for laminated glass. The task group is waiting for the tempered division to complete its work on deflection of monolithic tempered before proceeding further. The decision was taken to only consider PVB interlayer for the compression guidelines since it is the most common. The team developing guidelines for heavy door installations is seeking a hardware supplier that can help them mount doors and do compression testing so laminated glass can be included in the heavy door guide. Block took members through the CSA A500 balcony glass discussions, noting how different this standard is going to be from the American standards, which have largely simply specified laminated, tempered glass. The topic of edge treatments of laminated railings was raised, with members pointing out that wet-glazed balconies might have issues with exposed interlayer and that heat-strengthened, tempered, laminate edges can't be polished the way architects often want. A task group was formed to look at developing guidelines for this process.

On Sept. 25, the insulating division met chaired by Nathalie Thibault of Prelco. Members took a look at the draft GIB for insulating glass performance with a new table listing different types of IG and their relative performance characteristics. It was decided that this document was ready to go to ballot. The capillary tubes GIB has been published and is available for sale. GIBs on describing architectural glass constructions and secondary sealant bite are still in development. A guideline for the appearance of IGU edges in commercial glazing has been sent to ballot. A presentation on multiple cavity units is being developed to help address confusion among architects about when and how to apply multi-cavity options. A bent-glass GIB is also in development and there was some discussion of whether to include cold-bent. The task group working on a PIB migration GIB attracted a great deal of discussion even though no members of the group were present. The problem is very complex and it was difficult for members to even agree on a scope for the GIB. Tracy Rogers of Quanex opened a discussion of focused solar reflectivity and suggested GANA form a strategy to counter claims by the U.S. Vinyl Siding Institute that low-E coated windows can cause damage by reflecting solar heat onto nearby buildings. The division voted in favour of producing a document to educate the public on the root causes of focused reflected sunlight and to make recommendations to help homebuilders avoid the problem.

At lunch, Dwayne Torrey of the Canadian Standards Association introduced members to the CSA and discussed progress on its A500 standard for "building guards" – railings, balconies, balustrades etc. The standard will be broad-ranging, covering more than just glass railings. Quite a bit of detail will be included on railing systems with diagrams of approved designs. It is not anticipated that the standard will mandate laminated glass. Wind load requirements will not be included in the initial version of the standard, but may be in future amendments. Torrey estimated A500 will be ready for publication in the spring of 2015.

Veteran glass consultant, Bob Maltby, regaled the tempering division with tales of flat glass experimentation. Maltby has written a book titled Bob Maltby's Glass Book and was signing copies at the conference. The book is a huge compendium of Maltby's knowledge gained over 54 years in the industry. The tempering division then heard that the engineering standards manual is almost done. The heavy glass door design task group has been having monthly meetings to develop guidelines around this thorny issue. The main problem is compression causing hardware to loosen or causing the esthetics of the door to suffer. Guidelines for producing heat-treated glass have been updated and are in balloting. The division heard that iridescence is a hot topic and should be addressed. The heat soaking GIB will probably be restrained to a descriptive document introducing the process to architects. Chuck Wenci of Viracon gave a spirited presentation on the topic of optical distortion in glass, urging members to reject the word "distortion" in favour of simply pointing out that all glass has varying optical qualities. The division also looked at standards around the world for automotive glass.

After each division meeting, GANA executive director Ashley Charest reminded members that nominations are open for the Division Member Of The Year awards. Many divisions also have chairpersons who will reach the end of their terms at the GANA Annual Conference in Las Vegas in March and will need nominations for new candidates.