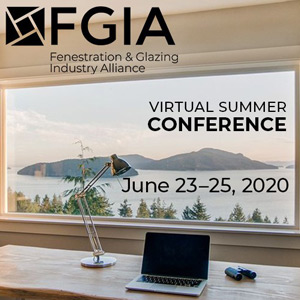 If there’s one thing this pandemic has done, it’s shaken us out of our old routines and forced us to try new things. In that spirit, the Fenestration and Glazing Industry Alliance held its Summer Conference online June 23 through 25, after cancelling the live event originally scheduled to take place in Chicago.

Attendees joined through the Zoom web conferencing app, which allowed them to see and hear the various panelists and thier presentation slide decks. They could ask questions via chat. Recordings of the proceedings are available to registrants at the FGIA website.

Notes from the conference:

Day 2 started out with an excellent panel discussing manufacturing and customer contact during the pandemic. Danny Smith (Ceridian), Lisa Bergeron (Jeld-Wen), Richard Braunstein (Oldcastle) Jeff Jackson (PGT Innovations), Greg Lambas (Katerra) and Matt Nuss (Vitrum) provided the discussion. Takeaways from the panel: uneven government responses are leading to uneven economic consequences; consistent messaging and communications internally and externally are the most important thing companies can do; the value of industry associations has been showcased as never before; and no one can be confident of the long-term effects of the pandemic, which might even be positive. Braunstein made the intriguing suggestion that the pandemic may lead to long-term changes in architecture.