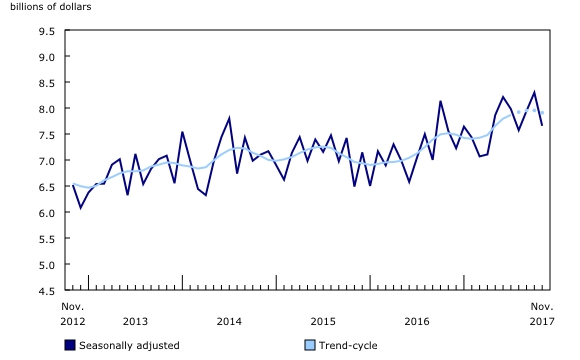 Jan. 10, 2018 –  The value of building permits issued by Canadian municipalities declined 7.7% to $7.7 billion in November, the first decrease in three months. Nationally, the value of permits for all building components declined, with the exception of single-family dwellings.

Non-residential construction intentions in 2017 surpass 2016 total
The value of building permits for non-residential structures fell 12.3% to $2.9 billion in November, following two monthly increases. The decline was spread over the three non-residential components (commercial, industrial and institutional).

As of November, Canadian municipalities had issued over $100 million more in building permits in 2017 compared to the 2016 total, led by higher construction intentions for universities, hospitals and manufacturing plants. Initiatives such as the Post-Secondary Institutions Strategic Investment Fund, announced in the 2016 Federal Budget, may have contributed to the increase in the value of university building permits in 2017, while multiple high-value permits helped to drive up the overall value for hospitals and manufacturing plants.

Quebec down in November following a strong October
The value of building permits in Quebec declined for all building components in November, falling 28.3% to $1.2 billion, the lowest value since February. The decrease came after the province registered a record high $1.7 billion in October.