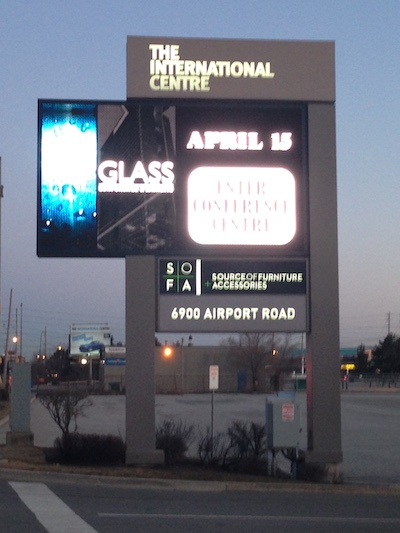 April 17, 2015 – Top Glass, Canada’s conference event for the commercial glazing industry, smashed through expectations on April 15 at the International Centre in Mississauga, Ont., with glaziers, fabricators and architects swarming an expanded show floor and education seminars packed to standing room only. The one-day event welcomed over 280 attendees from right across Canada, and attracted coverage by the U.S. trade press. The event was powered by strong support from industry suppliers, including Gold Sponsors Tremco and Alumicor, and Speaker Sponsors Erdman Automation and RavenBrick.

April 17, 2015 – Top Glass, Canada’s conference event for the commercial glazing industry, smashed through expectations on April 15 at the International Centre in Mississauga, Ont., with glaziers, fabricators and architects swarming an expanded show floor and education seminars packed to standing room only. The one-day event welcomed over 280 attendees from right across Canada, and attracted coverage by the U.S. trade press. The event was powered by strong support from industry suppliers, including Gold Sponsors Tremco and Alumicor, and Speaker Sponsors Erdman Automation and RavenBrick.

The four seminar sessions relocated to a room in the same hall as the show floor, making it easier for attendees to move back and forth between the sessions and the exhibits. The first two sessions were standing-room only, and even the final session of the day was more than three-quarters full.

Another new addition was the Ontario Glass and Metal Association’s presentation of its Awards of Excellence. Angelo Cairo of Stouffville Glass, OGMA president, and Steve Gusterson of Alumicor, OGMA vice-president, presented the Award of Excellence in glass building execution to Michael Roche of Flynn Canada for their work on Ryerson University in Toronto. Richard Brightling and Tom Carolan of Jigsaw Marketing/Stella Hardware accepted the award for design on behalf of N45 for the Isabel Bader Centre for Performing Arts in Kingston, Ont. Both winners expressed their gratitude at the recognition.

The education sessions began with Paul Gulletson, project manager with CSA Built Environment Group, previewing CSA’s upcoming A500 Building Guards standard. The new standard will cover most aspects of balconies, balustrades and other structures designed to prevent falling from height on buildings, but Gulletson focused on the aspects related to areas where glass might be used. The new standard will include requirements for materials, fasteners, hardware, connections to the structure, connections to glass

components. Key information for attendees was the revelation that A500 will include guard load, impact resistance, wind load and post-breakage retention requirements and that designs will need to be tested, potentially on-site, in order to be certified. Gulletson says a mixture of proscriptive and tested performance requirements will be used, leaving designers with some flexibility. Use of laminated glass will not be mandated as long as the material used can meet the performance specifications.

Next up was Stephane Hoffman of Morrison Hershfield with some great technical guidance on thermal performance of building envelopes. He shared a great deal of science on how heat is transmitted through common spandrel, curtain wall and window wall designs, comparing designs with varying window-to-wall ratios. He showed how careful attention to envelope detailing could achieve much higher efficiency performance, and how new technologies such as vacuum insulated curtain wall could help even more. Hoffman summed up by pointing out that simply adding more insulation is not always the best solution to achieving better thermal performance and that putting additional thought into design, especially with the help of advanced modelling technology, could be even better.

Hamid Vossoughi and Ehab Naim Ibrahim of Halsall Associates provided a fascinated crowd with insights into working with Chinese curtain wall fabricators drawn from their direct experience. Their discussion illustrated the explosive growth around the world of Chinese building envelope fabrication, and the surging market for glazing and construction in China itself. They discussed the trade disputes that have arisen over Chinese export pricing and noted that concerted action by Canada’s glazing community has largely corrected the problem of Chinese unitized curtain wall entering the country at unfair prices. Ibrahim answered the ubiquitous questions about Chinese quality by showing a series of draft specifications, complete with red-inked changes. The message was that Chinese pricing is very sharp – you get what you

pay for and nothing that you don’t. High quality is certainly achievable, but must be specified. Vossoughi said the Chinese challenge should be treated as an opportunity by North American fabricators to get better, especially through innovation and research. The two even gave some examples of the kind of cuisine you might sample on a trip to China – not for the timid! Architects attending the presentation commented afterwards that information of this kind is simply not available from any other source.

Finally, Louis Moreau of Agnora kept bums in seats right to the end of the day with his entertaining, well-informed and educational discussion of the challenges of fabricating “big-ass glass.” Agnora has the capability to temper, laminate and heat-strengthen single panels up to 130 by 300 inches. As a result, Moreau and his team have been involved in a number of unique projects and solved some problems that anyone trying to meet demand for larger and larger format windows will be likely to encounter. Anyone asking a question won a t-shirt!

For more news, images and video from the show, check out the Top Glass digital special edition, coming soon on glasscanadamag.com.