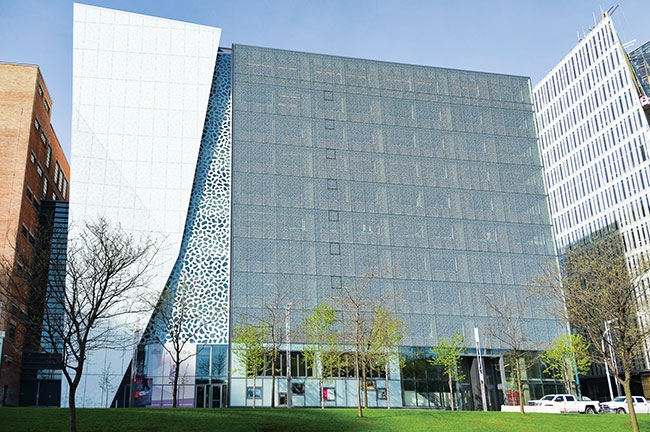 Silkscreened insulating glass, low-E 366 and low-E 272, on the Wilder Building at Espace Danse, Montreal. Prelco starts with the architect’s vision and works from there.

From its beginnings in 1954 cutting mirrors, replacing window screens and broken windows, the company now known as the Prelco Group is a vertically integrated supplier of value-added glass products to architectural, transportation and defense clients.

AT A GLANCE | Prelco Group

Dominic Lavoie has been the CEO of Prelco since just June, 2018, but like many people found running family-owned businesses, he has been with the company all his young life, since 2006. Coincidentally, his father worked as an engineer with the company for nearly the same number of years (he joined the company in 1973) before purchasing it in 1987. Vitrerie Générale created Prelco in 1973 and the two companies merged to become Prelco Inc. in 1988.

That the company headquarters and main 200,000-square-foot plant remain in Rivière-du-Loup, hundreds of kilometres from the nearest large city (but only a short distance from the Trans-Canada Highway), and never “upped sticks” to, say, an urban industrial park, is a family point of pride, Lavoie says. “This was something my father wanted. He is not from Rivière-du-Loup but when he moved here, he fell in love with the place and decided he wanted the headquarters to be here. Only during the past 19 years did we expand to other cities.”

Like other small towns (Rivière-du-Loup has around 20,000 souls) that have large, good businesses, it sounds as though Prelco’s employees value not having to “move to the big city” to find quality work. “On average, our employees have been with the company for more than 15 years, although recent hires have pushed that [average age] down somewhat. Generally, when they start at Prelco, they end their careers here. I inherited that from my father. I’m really proud of that.”

Vitrerie Générale began with five employees. But a dozen or so expansions later, Prelco now employs 350 in Rivière-du-Loup and around 650 across its six production plants.

When Prelco decided to expand out of town, it proceeded rapidly, mainly by buying client companies that, for the most part, were its own customers: A new production site in Saint-Jacques, N.B., came first in 2000. Then, in quick succession, Prelco purchased Montreal-based Industries Thermalite in 2002; Belleville, Ont.,-based Beclawat Manufacturing in 2005, and Princeville, Que.,-based Veralex in 2006.

Prelco MTL (previously Thermalite) specialises in high-performance insulated glass units. Beclawat serves the marine, rail, transit and defence industries. Veralex specialises in marine pleasure craft. “Veralex and Beclawat were customers of ours. We decided to integrate them. They make frames. It was for us something that made sense,” Lavoie says.

Prelco’s foray into the United States came in the form of setting up a plant in Rouses Point, N.Y., in 2016 to facilitate penetrating the U.S. market. While Prelco’s largest market is Canada and the U.S., it has some customers in Europe and sells glass sometimes to China. “We have glass that goes to Australia too,” Lavoie says.

As a result of its growth and acquisitions, Prelco’s products now range from insulating, spandrel, structural and heat-treated glass (with their many subtypes), for buildings; safety glass and frame systems for transportation (locomotives, Montreal’s Metro trains, the Vancouver SkyTrain); and glass for ground and marine defense applications such as ballistic, electromagnetically shielded and blast-resistant glass. Prelco’s marine clients include the Coast Guard, Seaspan Shipyard and the Offshore Fisheries science vessels it has built.

While the acquisitions unquestionably added expertise and verticality to the company, it is Prelco’s homegrown drive for technical superiority that distinguishes it from its main competitors, Lavoie says. “I don’t think there is another glass company in Canada with as much technical knowledge. Almost all our technical people are engineers. The knowledge we have is huge.” Specialist trades also include computer programmers, chemists and mould-making experts. “Our key assets are our technical people. Our continuous improvement team is the way we evolve,” Lavoie explains.

Among other things, the company offers turnkey solutions for framed and unframed window solutions, full engineering services, including CAD two- and three-dimensional modelling and in-house testing facilities. It possesses a range of certifications, including NIJ Standard-0101.06, EN1063 and STANAG 4569 standards, and NAVSEA. Prelco is also Lloyd’s Registry Type-approved.

Prelco does not make any primary glass. It buys glass stock and adds value to it – a critical point in understanding what the company does. “There is no more glass manufacturing in Canada. We purchase raw glass sheets called float glass. Our typical raw material is 130 by 204 inches. We transform the raw product to finished products.

“We see ourselves not anymore as a glass fabricator, but as experts in glass solutions. We develop them with architects, engineers and designers. We work with our customers to develop the best products. That makes us the largest glass company in Canada and one of the top 10 in North America,” Lavoie says, referring to a 2019 U.S. article that ranked top glass fabricators.

While Prelco is not particularly transparent about how it does this and that (my question about how glass that provides electromagnetic shielding is made yielded a diplomatic, “That is the secret of the recipe.”) there is plenty to say about what it does. Does a client want to block UV rays? Build curtainwall that automatically darkens as the day gets brighter (Prelco recently supplied just this kind of glass – a thermochromic glass, trade named Prel-Shade – to the CN Tower restaurant)? Keep hurricane-launched objects from coming through its windows? Keep out bullets (Prelco has its own shooting room for ballistic glass)? Provide fire resistance? Or perhaps keep demanding air traffic controllers happy? “We do four to five air traffic control towers a year. The glass quality is really special. The glass needs to be perfect. This quality of glass is never found in commercial products,” Lavoie says.

Silkscreened insulating glass, low-E 366 and low-E 272, on the Wilder Building at Espace Danse, Montreal. Prelco starts with the architect’s vision and works from there.

Buying from Prelco is not like walking into a store and picking out a window. “Never,” Lavoie says. “For example, at Veralex we always sit with the boatbuilding designer. We start with a blank page and design the most beautiful windshield we can imagine. It is the same with trains. We design the best windows for their business. Architecture…the best product that suits their needs. The architect’s name will be on the building. He wants it perfect.”

A nice example of helping fulfill architects’ visions are buildings with silkscreened glass or digital in-glass printing. A digital printer will apply one or more layers of liquid ceramic on the surface of the glass. Images can be repeated on several glass panels or enlarged and split between a number of panels, all in high definition. Or, a ceramic frit coating may be applied and fused with a heat treatment to the glass. Of the application of these two techniques, Lavoie says, “The main ones that put Prelco on the map are Ryerson University in Toronto and the École de technologie supérieure in Montreal. We are doing Phase II now – all jet printed.”

Prelco moves with the times. Take insulating glass, a good-sounding choice as the global warming crisis demands the development of more energy-efficient solutions. “Coatings improve the typical insulated glass. It was a niche market 10-15 years ago. Architects want to mix energy performance with esthetics, [like using] different colours,” Lavoie says.

The increase in the frequency of hurricanes is driving changes in standards too. “On the U.S. east coast, there are new tendencies toward hurricane glass – laminated so no objects can get through the glass. It is becoming a norm. The standards are changing,” Lavoie says.

Prelco is still growing. It recently doubled the capacity of its Prelco MTL plant to 100,000 square feet and is building a brand new plant for Veralex in Princeville, Que.

Is there any chance Prelco has hit a glass ceiling, so to speak, in serving new markets? Pulling a couple of my amateur notions of exotic applications out of my hat, I ask Lavoie if Prelco has supplied glass for spaceships or subsea vessels such as bathyscaphes. “Not yet.” He chuckles quietly and adds, “I think we will get there.”

Prelco has collaborated on several projects that have attracted national attention. For instance, it supplied vision glass for the Espace C2 event facility on the roof of the Fairmont Queen Elizabeth hotel in downtown Montreal – a project recognized as one of Canada’s top glazing projects in June Glass Canada. The project required oversized Energy Advantage tempered six-millimeter exterior glass panels with black stainless steel framing, and eight-millimeter clear low-E tempered on the interior.

Prelco also got involved with a very high-profile project in the renovations to the Wilder Espace Danse building in Montreal Place des Arts. The 1918 building got a completely new facade in 2017, including silkscreened and low-E insulating glass supplied by Prelco. The building now houses the Grands Ballet Canadiens as well as three other dance organizations.

But possibly the highest profile project – both in terms of notoriety and actual height – was Prelco’s work on the CN Tower. Anyone who had been up the tower before 2017 can attest to the scorching rays that came through the clear glass on the observation deck on a sunny day. Working with Suntuitive and Pleotint, Prelco fabricated new dynamic glass panels that adapt to solar conditions without electronics or human control.

With clients like these and a growing portfolio of nationally recognized work, it is becomiing clear that there’s nothing Prelco can’t do.