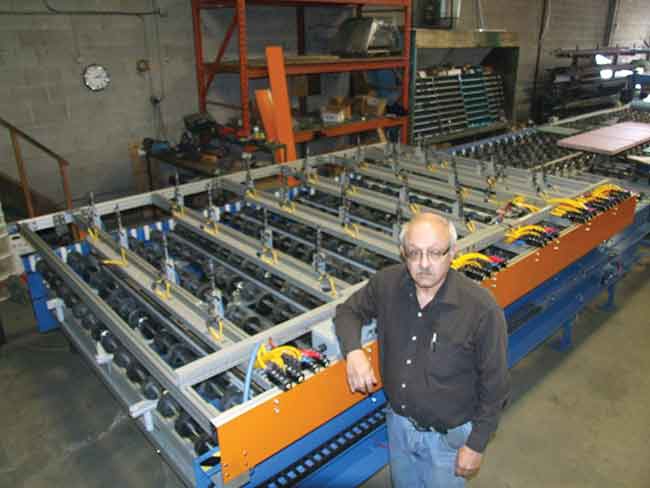 Felix Gutnik is the brains of Design and Integration, where he leverages over 25 years of machine-building experience into beautiful designs like this large-format pick-and-place laminating system. Now, he’s looking for the opportunity to do more.

Design and Integration is what you might call a pure engineering company. Located in a nondescript industrial unit in Concord, Ont., Felix Gutnik and his team are quietly coming up with elegant solutions to common problems in glass processing automation without multimillion-dollar R&D budgets or any government support. All they really have is Gutnik’s lifelong passion for building and fixing mechanical things, and experience in the glass industry that now stretches back three decades.

Design and Integration will probably build anything anyone asks them to, but their specialty is glass processing automation, including lamination lines, insulating glass assembly lines and material handling automation and equipment. They have provided a liquid lamination line with specialized tables for taping, tilting for assembly, filling and curing laminated glass units. That one was done in partnership with Uvekol.

Film lamination was Felix’s introduction to the glass business through work he did with Kodak at a prior company. Over the year’s he’s come up with some nifty tricks for solving the notoriously tricky problems of automating film lamination. For instance, one design uses a two-level approach to achieve high-speed lamination even of irregular shapes. The line has two feeder conveyors, one over the other. One sheet is brought in and loaded into the top conveyor. The second is brought in and a worker places and trims the interlayer film. Then the bottom piece, with the interlayer on it, feeds through. As it emerges, the top sheet is precisely fed forward so that it droops down and its edge matches up with the edge of the bottom sheet. As the two pieces feed forward, the top sheet is gently laid onto the interlayer, with its weight forcing out any air between the layers. The system works just as well with round or odd-shaped glass as it does with rectangles.

Design and Integration has also made a very cool cross-cut machine for quickly automating trimming on high-speed, mass production laminating operations. A panel of glass is fed under the film roller, which dispenses the film onto the surface. When its leading edge emerges on the other side, it hits a stop. A sensor stop drops down on the infeed side as the next sheet of glass comes along. When the second sheet hits the sensor, it pushes it forward until it hits the first panel. The sensor registers distance between the two stops, then retracts out of the way, leaving the two panels a very precise distance apart on the conveyor. The panels roll forward. As the back edge of the first panel emerges, a knife cuts off the film with almost no waste. At the same time, the second panel’s interlayer is placed. As long as each piece is long enough to reach past the film roller, panels of different lengths can have interlayer applied and cut without making any adjustments.

Gutnik has also come up with a novel solution to curing PVB laminate without using an autoclave. The glass panels are put in vacuum bags and stacked on a large, portable rack that can hold dozens of sheets. The entire rack is then put into a lamination oven that goes through the necessary heating and cooling cycles to cure the interlayer. It takes about three hours to cure one batch. Meanwhile, a worker can be loading another rack with freshly assembled units ready for curing. The finished ones come out, the new ones go in and the baking can start again quickly. Gutnik likes this solution because it eliminates autoclaves and can make multiple large panels quickly. The slots on the rack he designed are 10 feet wide by 20 feet deep, and there are eight of them. The system has also been applied to a heat soaking application.

So coming up with innovative solutions has never been a problem for Design and Integration. Gutnik credits his company’s size and the fact that the buck stops with him when it comes to engineering design. “Major companies have mechanical engineers, electric engineers, programmers, concept engineers, all this,” he explains. “The problem is, when a group of people try to develop a horse, sometimes it becomes a camel. Because I work in programming and electrical and mechanical and hydraulics, I design from one source. That’s why I have less screw-ups. But after 22 years in business, last year I made a major screw-up.”

The screw-up Gutnik refers to is his attempt to develop a new kind of horizontal laminator for PVB, EVA and Sentry glass. The concept was to make a two-level system that would pass units through a compact furnace then automatically drop them with a scissor lift to a second level, right underneath, where they would be compressed in a press and heated again to achieve final bonding without an autoclave. The system could be designed with yet another conveyor level underneath the first two levels to let new units pass from the washer to a second inline laminator, effectively doubling the capacity of the line and taking all the product that a standard washer can put through.  Michael Byrne of Explore One is familiar with Gutnik’s prototype. “The goal was to build a machine that was about 1/10th the cost of traditional laminating systems that would require no vacuum bags and be installed with a footprint of as little as 1,200 square feet,” he explains. “The system would give smaller shops the capability to produce laminated glass in a very cost-effective manner. It would also allow for an unprecedented level of flexibility from a pure laminated glass production perspective.”

Into every development process, some rain must fall. Gutnik’s bad weather began with an order of hydraulic relief valves. In the system, hot and cold fluid runs through a large platoon which heats and cools the glass in turn. Both the relief valves and the backup relief valves proved to be faulty and caused an overload in the system, causing 400-degree oil to explode out, destroying a significant portion of his prototype. The wrecked hulk of the first prototype now sits in his back lot, covered in a tarp.

Gutnik had invested about $400,000 of his own money in the prototype. With the destruction of his parts, it became a significant challenge to continue development. One option he explored was assistance from one of the government programs that are supposedly eager to lavish money on innovative small businesses. What Gutnik and his team have found is that these programs are in fact set up to reward large, existing R&D departments with dedicated staff and budgets and labs with people in white coats. The paperwork requirements alone are impossible for a small operator to meet. According to Andrei Lagounov, one of Gutnik’s sales people, one government R&D program required paperwork justifying the expense of almost every single part they bought to build a prototype. When he saw similar paperwork from a large engine manufacturer, he saw that it was allowed to justify whole large assemblies in one document because the parts involved were already in its existing R&D inventory. “How is a small company supposed to do that?” Lagounov asks. “We buy the parts as we need them, and we rarely know ahead of time what we are going to need.”

Design and Integration has weathered the storm and come out dry and smiling. At September’s GlassBuild, it will unveil the fully functioning Lami ExPress, a glass laminating system that eliminates the need for vacuum bagging or an autoclave. The system can process units of varying thicknesses and sizes with a batch area of seven by 10 feet. Design and Integration is quoting an energy cost per load of $2 and a cycle time of about 1:15, depending on the PVB used. The unit comes with touch screen controls and a Samsung tablet for mobile control. The total space required is 36 by 10 feet.

So it’s one hard-won victory for Design and Integration. One hopes there are more on the way and that, some day, the agencies charged with encouraging companies like this will find some way to actually do their jobs.

Felix Gutnik is the brains of Design and Integration, where he leverages over 25 years of machine-building experience into beautiful designs like this large-format pick-and-place laminating system. Now, he’s looking for the opportunity to do more.

Concept to reality: the LamiExpress
Design and Integration’s LamiExpress will debut at GlassBuild America in September. It has the potential to save fabricators considerable time and floor space, and to make in-house lamination affordable for smaller shops. It is also optimized for integration into larger production lines.

Design and Integration’s machines are built at the company’s facility in Concorde, Ont. Approximate delivery lead time is four months.