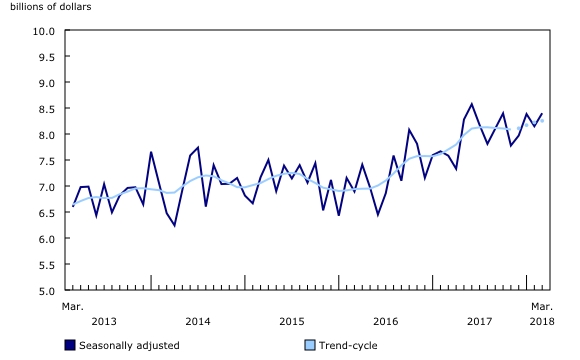 May 17, 2018 – The value of building permits issued by Canadian municipalities increased 3.1% to $8.4 billion in March, following a 2.8% decline in February. The rise was mainly the result of higher construction intentions for multi-family dwellings, particularly in Quebec and British Columbia, and, to a lesser extent, by the commercial component.

The value of building permits issued for industrial structures rose 11.6% to $666.5 million in March, largely the result of primary industry buildings, which includes farm buildings and greenhouses.

The institutional component fell 12.7% to $647.7 million in March, led by Quebec and Alberta. Nationally, lower construction intentions for hospitals contributed to the decline.

First quarter: The value of multi-family dwellings leads the rise
Canadian municipalities issued $24.9 billion worth of building permits in the first quarter of 2018, up 3.3% compared with the fourth quarter of 2017.

On the other hand, the value of non-residential building permits fell 2.6% from the fourth quarter of 2017 to $9.0 billion in the first quarter of 2018. The drop was the result of lower activity in both the industrial and institutional components.