Increase in the value of commercial and institutional permits 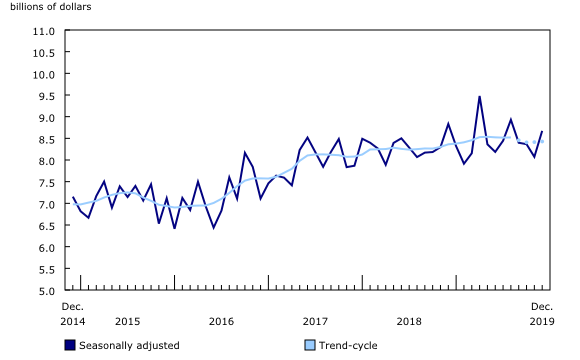 The value of commercial permits rose 19.7% to $2.0 billion in December, largely due to plans for the multi-use commercial development, “Royalmount”, in the CMA of Montréal.

Meanwhile, the value of institutional permits rose to its highest level since September 2017 (+10.8% to $1.0 billion), largely due to permits for the redevelopment of the Centre for Addiction and Mental Health in Toronto.

Annual review 2019
In 2019, municipalities issued $102.4 billion worth of permits, up 2.6% compared with 2018. Gains were reported in six provinces, with the largest increase in Ontario (+$2.8 billion). Alberta recorded the largest decrease (-$1.8 billion), with declines in all building types.

The Edmonton CMA reported the largest decrease in the total value of building permits (-21.5% to $3.9 billion), accounting for more than half of the overall decline in Alberta. This was the fifth consecutive annual decrease in the CMA of Edmonton, reflecting the challenging economic environment in the province.

Building intentions in the non-residential sector increased 9.4% to $40.4 billion, with gains in seven provinces. All components reported increases, led by commercial permits (+7.5% to $23.2 billion).