News
New plant is on the fastener track

Business is definitely screwy at SFS intec, one of Hamilton's newest companies.
But that's to be expected at a fastener plant.

Inside the spotless and sprawling 35,000-square-foot Waterdown
facility, workers guide automated machines putting washers on screws
and use a sprayer to paint hundreds of fasteners dangling from a rack a
bright red before they head into the oven to be baked for seven minutes.

On a peak day, this plant and its 38 employees finish 400,000
stainless steel and carbon steel self-drilling fasteners before they
are shipped out to customers across Canada. They are sent primarily to
construction, truck and trailer and roofing companies where they are
used to fasten metal, wood and glass. But SFS intec globally produces
fasteners for the automotive and aerospace industries, electronics and
medical equipment.

The company offered plant tours as part of a grand opening celebration of its only Canadian location yesterday. 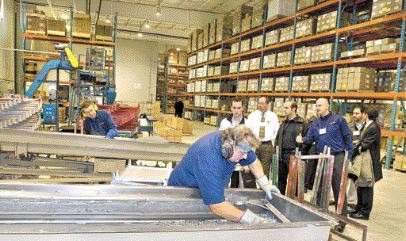 Switzerland-based SFS intec doesn't manufacture its screws, nuts and
washers in Waterdown. They come from company manufacturing plants in
the United States and Switzerland or from one of two Canadian suppliers.

Instead, the Canadian location finishes and customizes the products.

Why not manufacture and finish in the same plant?

"Our mantra is, closest to our customers," said Michael Mullen,
president of North American operations. "When we can customize our
products closest to the time of sale, it lowers our costs by reducing
unnecessary inventory."

It's also better customer service. The plant can turn around an
order in a day, which is a huge competitive advantage over offshore
manufacturers, he says.

The company moved into the Flamborough business park off Highway 5 a
little less than a year ago. It had outgrown its Oakville plant and
couldn't find an alternative in the jam-packed industrial landscape
there.

The primary consideration in finding a new location was ensuring the
company could retain as much of its workforce as possible, said Jim
Urquhart, vice-president and general manager of Canadian operations.

The Hamilton location proved a perfect choice, he said.

Mayor Fred Eisenberger said companies such as SFS intec show that Hamilton's economy is moving well beyond its steel roots.

"We've become much more, much faster than ever before. We're a
steel, research, culture and farming city that is dedicated to reviving
itself. We have one of the most diversified economies in Ontario."