The MIPS brain protection system is designed to add protection against rotational motion transferred to the brain. Photo Credit: MIPS

Construction can be a dangerous industry. Across North America, construction professionals – whether ironworkers, sandhogs, electricians or plumbers – build the tallest buildings, the longest highways and the most awe-inspiring infrastructure that has forever been the foundation of moving a national economy forward. They do so knowing the risks inherent in achieving big things – and knowing that things can sometimes take a bad turn, with one in every 10 construction workers being injured every year and companies bearing the financial brunt of those injuries in both workers’ compensation costs and lost time on jobs.

When jobsite incidents occur, it’s a worker’s safety equipment that can often mean the difference between going home, going to the hospital or going to the morgue.

Safety helmets are the most ubiquitous piece of equipment found on any job site. They are the extension of a worker’s personality, often meticulously decorated with stickers from past jobs, union affiliations or favorite bands and beverages.

But many of those helmets are missing something: a piece of technology that can reduce the risk of a traumatic brain injury.

Construction companies outside the U.S. utilize MIPS technology (Multi-directional Impact Protection System) inside the helmet, which is an insert that reduces the risk for rotational motion injuries. When something falls from height or impacts from the side and strikes a worker on a job site, it never hits straight on. There is almost always an angled force that comes to bear, rotating the head inside the helmet and causing trauma to the brain. MIPS technology allows the helmet to rotate, reducing the rotational motion that may cause stress on the brain. 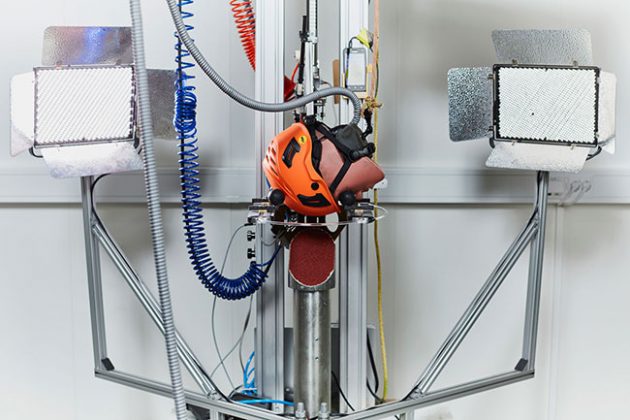 The dummy head, wearing a helmet, was subjected to an angled impact in a test rig at the MIPS lab in Sweden.

The MIPS test rig is developed for testing angled impacts to simulate a fall during a crash. Depending on what type of helmet is tested, the helmet is dropped from 2.2 to 3.1 metres onto a 45-degree impact angle covered with grinding paper. Three different types of impact points are tested and all helmets are tested in all sizes.

Data is gathered using nine accelerometers inside a Hybrid III crash test dummy head and analyzed using finite element models. The same helmet model is compared with and without MIPS to make sure the helmet passes the strain reduction criteria MIPS have on all approved helmets.

More than 27,000 tests have been conducted at the global test centre in Stockholm, Sweden. In addition to that, a number of third-party tests have also been made supporting MIPS safety claims.

In an industry where safety is universally touted as “a top priority” or “job number one,” we think putting safer technology into the hands – and on the heads – of every North American construction worker is an absolute necessity. •

Peter Halldin is CSO and co-founder of MIPS, and a researcher at the Swedish Royal Institute of Technology. Together with Hans von Holst, a Swedish neurosurgeon, they founded MIPS, a brain protection system – engineered to add protection to helmets.