A look at the risks of noise in manufacturing. 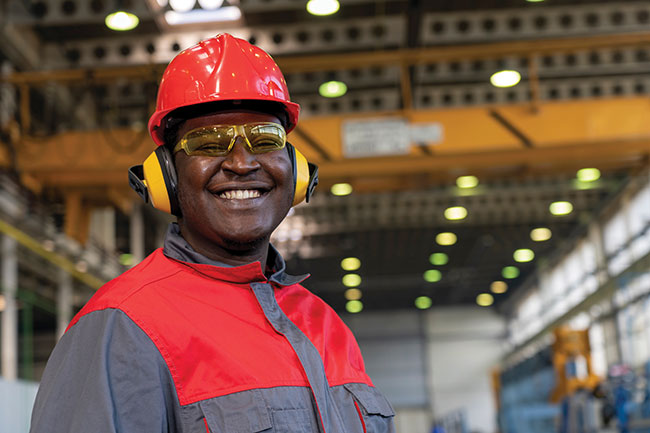 Workers in manufacturing settings can get used to high levels of noise. But extended exposure over time can permanently injure their hearing. There are measures you can take to protect them photo: © RGtimeline / Adobe Stock

Hazardous noises are among the most common dangers for workers worldwide. An estimated 20 percent of workers around the globe are exposed to hazardous noises (over 85 decibels). Workers in the manufacturing, mining and construction sectors have the highest risk of exposure to dangerous noises and hearing loss, but there are cases of it in every work sector. Even typical office environments can be noisy, especially when equipment such as high-capacity printers are running and high-pitched phones are ringing.

Not a new problem
Extremely loud noises have been recognized as a danger to humans for a very long time. Still, the boom in industrialization in the 1800s brought a new level of hazardous noises to the entire world.

There aren’t many natural noises that can cause hearing loss in humans, but as machinery and technology rapidly developed during the 19th and 20th centuries, machinery in the manufacturing sector got exponentially louder.

Many soldiers returned from World War II with partial or total hearing loss from the noise levels of the guns and explosives used in combat. But it wasn’t until after the war that systematic efforts began to prevent hearing loss among soldiers. In 1956 the U.S. Air Force issued updated regulations on noise-induced hearing loss (NIHL). They specified the seven components of effective hearing loss prevention, which are still recognized today.

NIHL is a permanent injury, meaning no surgery or aid can help correct the hearing loss. In many workplaces, someone may be experiencing NIHL and not even know it, which can lead to significant hearing loss over their career without the worker even realizing it. It can also put their coworkers at risk and can be a safety hazard. Even in cases where there are only temporary effects, such as ringing of the ears or headaches, repeated cases of that noise level will eventually start to cause permanent hearing loss.

These industries all manufacture products. Some of the more prominent sectors in the manufacturing industries are: beverages, tobacco, food, wood, metals, transportation, furniture and the chemical industry. Workers in these industries should take extra safety precautions to protect their hearing.

Detect early for best results
There are a few different methods of checking for hearing loss. However, the recommended way is simply to see a primary care doctor because they are qualified and prepared to diagnose hearing troubles. Workers can also see an audiologist, a doctor who specializes in hearing loss.

Many of these symptoms happen subconsciously, such as someone choosing to hang out with friends less often due to their difficulty in communication comprehension. Social withdrawal can lead to isolation and depression if one’s hearing loss goes untreated for long enough.

In addition to the psychological and social effects, untreated hearing loss can cause significant cognitive decline. Because of how the human brain works, hearing is a form of stimulation, and stimulation is like a workout for the brain. Therefore, over time, one’s brain becomes weaker if it receives less stimulation, just like one’s muscles would.

Avoiding NIHS
Employers with environments creating hazardous noises can do a few things to protect their workers’ hearing. First, test your work environment. If you’re unsure whether your work environment has hazardous noise levels, many free apps are available to test it. If your workplace commonly reaches 85 decibels, all workers should wear ear protection. Next, make sure the employees actually use the ear protection. Ear protection is a simple, easy step to prevent excessively loud noises from reaching the inner ear. Noise-muffling safety earmuffs or noise-canceling headphones can help protect hearing. These are the type of ear protection anyone would wear to practice at a shooting range.

But we still need to be able to hear…
Employees need to be able to hear even when manufacturing gets loud. One of the best ways to get around that noise is to use a tour guide system. Tour guide systems uses shortwave radios to aid communication. A headset protects workers’ ears but allows them to continually hear to receive instructions, training or other important communication that background noise might drown out. If your short wave radios don’t have headsets, they are still designed to carry sound and convey it in high-noise situations, letting workers hear what they need to hear.

Noise-induced hearing loss doesn’t have to be inevitable in a high-decibel environment. With a few protective steps, you can protect your workers’ hearing for life. •

About the author
Rick Farrell is president of Plant-Tours.com. He has provided communication, training and group hospitality consulting services to manufacturers for over 40 years.