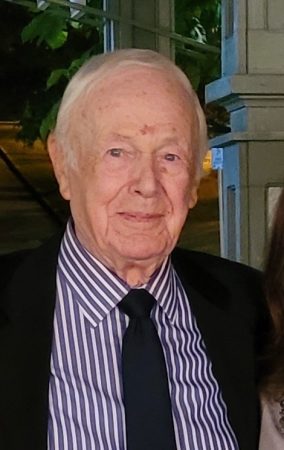 It is with sad hearts that we report the passing of one of the true pillars of our industry, John Baldry.

John was born and raised in Warrington, England. He was the youngest of 4 children.

He is survived by his two sons, Mark and Allen, their wives, and numerous grandchildren and great grandchildren.

After he completed his obligatory service in the Royal Navy, in 1946, John joined Pilkington Glass.

Starting in the mail room, John quickly rose within the company and was a long-time executive of Pilkington Glass in England, as well as India (where both his sons were born) and finally transferring to Canada. With the company changing ownership over the years, John was VP of marketing for many years before finishing his career as President of AFG Glass, Canada.

In his retirement John jumped into golfing and was a long-time member of the Donalda Club. Some of his noteable accomplishments was scoring three hole-in-ones.

He cherished his friendships with his golfing buddies, as well as all the friends he had made in the glass industry.

He enjoyed salmon/lake trout fishing and travelled throughout Canada looking for that trophy.

John was a one-of-a-kind gentleman, and our industry is stronger today because of him. He will truly be missed.