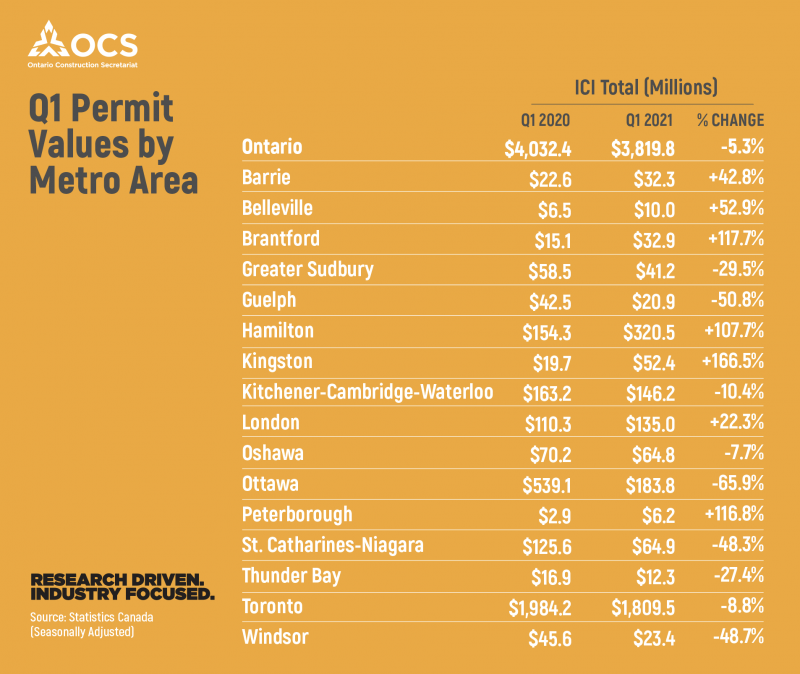 First quarter ICI permit values were up by double-digits over Q1 2020 in London (+22.3%), Barrie (+42.8%) and Belleville (+52.9%). Permit values more than doubled in Q1 2021 compared to Q1 2020 in Hamilton (+107.7%), Peterborough (116.8%), Brantford (117.7%) and Kingston (166.5%). These significant increases are due partly to these metro areas recording disproportionately low permit totals in Q1 2020. The increases in Hamilton and Brantford are also explained by permits issued for major industrial projects. The City of Hamilton issued a $120 million permit for a new Amazon warehouse facility in February, while an $18 million permit was issued by the City of Brantford in March for a new plant-based consumer products production facility.

While the first months of 2021 have seen escalating lockdown and stay-at-home order conditions in Ontario, construction industry employment has so far been relatively stable. In the past six months, construction employment in Ontario has remained close to 540,000, not straying more than about one percent higher or lower. The biggest month-over-month change was a 2% increase between February and March of this year. While construction employment has been relatively stable, it is yet to return to pre-pandemic levels. In the first quarter of 2020, before the pandemic took hold, employment in Ontario’s construction industry averaged 561,000 compared to 538,000 in the first quarter of 2021.

The general unemployment rate for Ontario was 9.0% in April, up from 7.5% in March. Despite the escalating lockdown and stay-at-home order conditions, these are the two lowest monthly unemployment rates recorded in Ontario since the pandemic began.

It should be noted for both the unemployment rate and the construction employment data that the April Labour Force Survey reflects conditions during the week of April 11-17. This means that the data would capture the impact of the April 8 stay-at-home order, but not the strengthened stay-at-home order of April 16. The effects of the April 16 order will not be known until May’s Labour Force Survey data is released in early June.