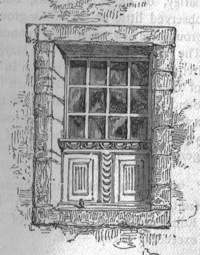 June 21, 2010 – Windows aren’t just a part of daily life, they have figured prominently both in human history and literary sources. From the distant past to low-earth orbit, we bring you our picks for some of the most significant windows in history.

June 21, 2010 – Windows aren’t just a part of daily life, they have figured prominently both in human history and literary sources. From the distant past to low-earth orbit, we bring you our picks for some of the most significant windows in history.

Humanity gained a new perspective on its place in the universe at precisely 6:17 UTC, on April 12, 1961. That was when the Vostok 1 spacecraft reached orbit with cosmonaut Yuri Gagarin aboard, making him the first person to ever reach space. Gagarin’s terse commentary at the time, "The craft is operating normally. I can see Earth in the view port of the Vzor. Everything is proceeding as planned," downplays the historic importance of the occasion. Humanity had been granted a new view of ourselves and our home, and we would never be the same.

The south clerestory contains some of the oldest surviving stained glass windows in the entire world. The windows are portraits of the prophets Jonah, Daniel, Hosea, Moses and David from the late 11th or early 12th century. The prophet Daniel is shown here.

Sometimes a window is famous not for itself, but simply for what took place there. The picture shown here, "View from the Window at Le Gras” was the first successful permanent photograph, created by Nicéphore Niépce in 1826 at Saint-Loup-de-Varennes.

Niépce captured the photo with a camera obscura focused onto a sheet of 20 × 25 cm oil-treated bitumen. As a result of the 8-hour exposure, sunlight illuminates the buildings on both sides.

Today, the plate is on display at the Harry Ransom Humanities Research Center at the University of Texas. Life Magazine listed it among "100 Photographs that Changed the World".

Rome has much to offer for the pleasure or business visitor. A rich sense of history pervades the very stones of this ancient capital, and one could spend a lifetime without exhausting its wonders.

However, there is one stop that is almost every tourist’s list: the Vatican. Those lucky enough to visit on a Sunday gather in St. Peter’s Square for a rare experience. Every Sunday at noon, the Pope appears in a third-floor window, and gives the Angelus blessing.

The building that window is in is part of the Apostolic Palace, construction of which began over 600 years ago and is still ongoing.

The Cupola is an observation module installed on the International Space Station (ISS) used to observe experiments and dockings. Built by the European Space Agency, the Cupola is the largest window ever deployed in space. Designed by the Italian contractor Thales Alenia Space, it has six side windows and a top window. Like many windows on Earth, they are equipped to shutters to protect them from harm, in this case micrometeorites and orbital debris.