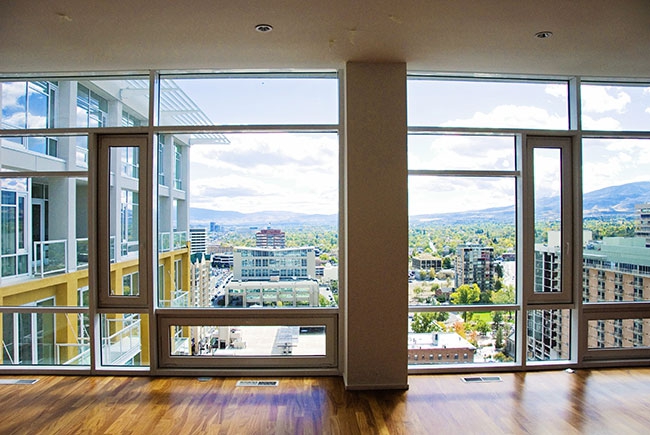 Significant improvements in energy use, water and air infiltration support the argument for vinyl profiles as a key element in a building’s efficiency and occupants’ comfort. Rehau takes a look at recent trends and renovation projects in which their uPVC window and door designs replace aluminum in anticipation of changing building codes in Canada.

Vinyl does not really burn. It certainly melts and deforms under sufficient heat and, when heated, releases enough heat to fail standard combustibility tests, but it doesn’t burn in the sense of being consumed by flame and releasing hot particles and flaming brands that spread fire to other areas.

Yet the Canadian National Building Code, and the provincial codes that follow it, has long considered vinyl a combustible material, and therefore subject to severe restrictions on its use on the facades of Part 3 buildings. As a result, Canadian building designers have been cut off from many of the vinyl options available to European and U.S. builders. As energy efficiency requirements tighten, many feel it is time Canadian code authorities revisit the question of vinyl’s suitability for high-rise fenestration and give building envelope designers a powerful tool to improve energy performance.

The wheels are in motion. An industry group at last November’s Windoor show saw a presentation by Peter Senez of Sereca, a fire safety consultant, who showed dramatic evidence of the ability of vinyl window frames to withstand fire. He had photos of burned building facades showing both vinyl and aluminum frames. The vinyl-framed windows did not appear any more destroyed by the fire, and in some cases appeared to have held together better. Fire had not spread appreciably more around the vinyl windows as opposed to the aluminum ones. Obviously, these were not controlled tests and didn’t prove anything, but the issue would seem to bear further investigation. Senez, and a speaker from the National Research Council, laid out a roadmap by which the industry could do the necessary research and have the building code changed at its next revision in 2020. Many in the room were enthusiastic to take up the project.

There are significant potential benefits to using uPVC vinyl in high-rise and commercial building applications. The building envelope, while important in terms of aesthetics, is also the most contributing factor when it comes to energy loss. Windows and doors make up a sizable portion of the building envelope; therefore, their quality – including that of their profile materials – determines how effectively the building is insulated from uncomfortable temperatures, moisture, drafts and exterior noise. Increasingly, vinyl is proving its advantages over other materials in this regard and changing the commercial windows landscape in Canada.

“We are very happy to learn that there will be a push from the vinyl window industry to enhance current code in Canada vis-à-vis window use in non-combustible buildings” said Helmut Grohschaedl, director of the window and door business unit for Rehau. “For years in Europe and in the U.S., architects and building owners have looked to uPVC windows for their robust designs and tremendous u-values, which have allowed them to meet both performance grades and energy requirements.”

“With more than 50 years of experience developing window and door profiles and designs for installations throughout Europe – and more than 30 years in North America – we are well-equipped and ready to support the growth of uPVC in the Canadian commercial market,” Grohschaedl said.

The end result is that building owners are able to pocket energy savings on these projects throughout the years or to downsize the HVAC loading on large projects in order to save on initial build costs.

Significant improvements in energy use, water and air infiltration support the argument for vinyl profiles as a key element in a building’s efficiency and occupants’ comfort. Rehau takes a look at recent trends and renovation projects in which their uPVC window and door designs replace aluminum in anticipation of changing building codes in Canada.

Moisture performance, IAQ and sound abatement
Beyond energy savings, a window or door’s framing material and design is directly related to how well they are able to keep exterior weather-related moisture from leaking into the window frame itself and to prevent condensation from forming due to differences between indoor and outdoor temperatures. A high-quality, high-performance uPVC window and door design will protect from moisture and mold damage and thus help ensure indoor air quality.

Another benefit of uPVC windows is their ability to block the transmission of sound, a quality that has contributed to their increased popularity in commercial buildings where occupant comfort is put on the list of priorities, such as apartment, condominium and hotel projects. There, quiet habitations translate directly to occupant satisfaction, which means revenue.

An array of application and design possibilities
The benefits of uPVC are no longer limited to certain types of projects. In the U.S. specifically, uPVC steel-reinforced windows are increasingly being installed in high-rise buildings, opening up a wide range of opportunities for architects to design to high-performance standards – from apartment and condominium buildings to office spaces and mixed-use developments. This creates many uses where architects can specify these high-performance products and take advantage of all the benefits outlined earlier – from apartment and condominium buildings, office spaces to mixed-use developments as well as hotels and resorts.

UPVC windows further contribute to architectural interest and attractiveness as they are easily foiled with solid colour or woodgrain patterns to create a design concept for the interior as well as exterior. An example of this is the loft trend, in which architects have been able to keep the industrial look when recovering older, urban industrial sites. On the outside, colours such as anodized, bronze, and black restore the original looks while the interiors are warmed with colours such as white, clay and beige.

The following examples illustrate how building owners are benefitting from high-performance uPVC window and door designs.

Holiday Inn Gaithersburg
In 2007, the then 35-year-old Holiday Inn Gaithersburg underwent a complete renovation centred around its property management company’s “Our Big Green” initiative to conserve resources, reduce and recycle waste and incorporate the latest in sustainable building methods and products. The major focus of this renovation was a total window replacement to improve the hotel’s aesthetics and sound abatement properties, and most significantly to enhance its energy performance. A hybrid uPVC Rehau curtain wall design system from Rehau was selected after energy modeling results showed they could provide a regulated utility cost reduction of 12.4 per cent, translating to both a $10,000 annual energy cost savings and the project’s qualification for a 60-cent-per-square-foot tax deduction through the Energy Efficient Commercial Buildings Tax Deduction program. Since the renovation’s completion in 2009, the Holiday Inn Gaithersburg has more than realized a return on its investment, and has noted a high level of guest satisfaction.

101 Ocean Boardwalk
The windows at 101 Boardwalk had leaked drastically for years. After a change of ownership in 2012, tenants were promised that keeping them dry was priority number one. The architect’s plans called for tearing off the façade in order to properly replace the 2,311 windows. Rehau System 4500 uPVC tilt-turn windows increased strength, improved energy efficiency and allowed for efficient water drainage. The system also exceeded New Jersey performance requirements for hurricane and impact-resistance.

Windows from a half-dozen or more manufacturers were initially considered, but ultimately the developer and owner decided on Rehau windows because of their value and the payoff they would provide in terms of energy efficiency. “Price, quality and workmanship sold the job,” a representative from the developer said. “We were impressed by the ability to build them quickly and the ease of installation. The windows had to be customized to fit the building and not the other way around.”

Beverly Garland Hotel
With guest happiness in mind, hotel management recently sought a solution to sound-abatement issues with the original doors leading to exterior balcony-patios. “The hotel’s location near the ever-bustling Los Angeles freeway and Universal Studios amusement park meant that the original aluminum-frame exterior doors were no longer sufficient in insulating guests from sounds outside,” the hotel’s general manager explained. “In addition, energy management had become a concern as we realized the HVAC systems were working extra hard to maintain agreeable temperatures for our guests. When we came across the System 4500 uPVC solution from Rehau, we were encouraged it could meet our performance needs right off the bat.”

Rehau’s western region sales manager, Ralph Childs, adds, “They were very excited about the thermal value of the System 4500 door design, which translates to significant energy cost reductions when compared with the performance of aluminum frame doors. Also, our clay-coloured profile blends nicely with the historic hotel’s rustic mission-style and wood features.”

”Our experience with the doors now that they have been installed has been phenomenal,” hotel representatives said. “We’ve seen a real reduction in noise coming into the room, and the overall aesthetic exterior appeal is even better than expected. Also, our housekeeping staff has found they are easy to clean, operate and maintain.”

“We have seen a dramatic change in the mindset of not only building owners but also architects and the developers in the U.S. during the past 10 years,” Grohschaedl said. “With any new product – or even an established product in a new application – change takes time. But we are more than confident that vinyl will continue to gain in the commercial construction market with proven, clear advantages over other framing materials. With those advantages speaking for themselves, I believe vinyl will quickly gain ground in the Canadian commercial construction market, as well.”

About the author: Corrie Neukirchner is marketing manager for windows and doors at Rehau Construction.
Print this page