People who attended GlassBuild in October are still buzzing. 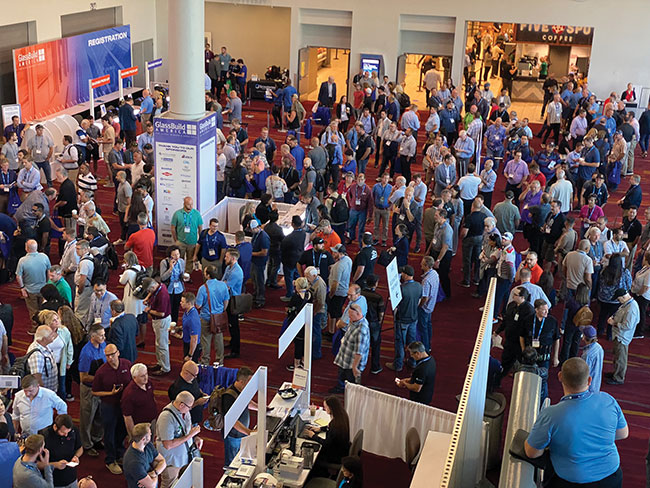 Finally, GlassBuild again. The biggest glass and fenestration trade fair in the western hemisphere returned to Las Vegas, Nev., with an enormous event Oct. 18 to 20.

Vic McConnell, partner with Smith Cashion and Orr, presented the crammed session “Contracts to Protect Your Business in an Uncertain Environment” at the record-breaking Glazing Executives Forum held onsite at GlassBuild.

McConnell opened by telling the audience a familiar story about a client who had a year-old contract to supply doors to a project but prices seriously escalated since it was originally bid. “My customer wanted to know what they could do,” McConnell said. “The first question your lawyer should always ask is, ‘Let me see your contract.’ This was a pre-COVID contract so there were no escalation clauses in it at all. Once you go under contract after bidding for a job, you are stuck with it.”

“There is nothing you can do but beg for a price adjustment at this point,” noted McConnell, who told attendees that some public entities dealing with public funds will sometimes allow for price adjustments, however private developers will usually not. “We are trying to figure out how to go forward to prevent this from happening again.”

McConnell shared that, according to Dodge data, in 2017 the two greatest disputes and claims that trade subcontractors reported were construction defects and warranty claims. “These were the biggest concerns. The highest operational risk factor in 2017 was schedule changes, especially for a late following trade. In 2017, we were also already struggling with some labour issues. Cost escalation was the smallest concern. Nobody was worried about cost escalation.”

“What can you do to better predict what risk is on your project?” asked McConnell. “I preach this on a daily basis to our clients. How many of you have a team to brainstorm with to identify risk?”

McConnell told attendees that it starts with the proposal. Then you have to consider which contract you’re going to go into. “Lump sum is the most risky. If the prime contract is a lump sum contract, your contract is going to be a lump sum contract. If it’s cost-plus, you have some flexibility in case prices do go up. You also must reward the owner if prices go down.”

“Who cares more about residential than commercial?” senior economist, Connor Lokar of ITR Economics, asked GEF attendees, looking for a show of hands. “Only a few. That’s good because you’re screwed.” Lokar’s annual industry economic forecast was worth the trip to GlassBuild alone. “Everyone is aware the global economy is decelerating. “The economy is experiencing a slowing growth trend,” said Lokar. “Slowing growth is a two-word phrase. The second word is growth. The pie is still getting bigger, it’s just not getting bigger at the same pace as it was last year. We are in our initial descent. The landing gear is out. The pilot is on the intercom. We are not crashing into the runway. That is not what is happening, right now.”

Lokar said the forecast is decelerating into the fourth quarter of next year before things pick back up for a normal rate of growth for 2024. “If you look at Canada, Mexico and the United States, I see strong economies,” said Lokar. “I see reshoring production back to North America. All these are very good things. For that reason, I’m bullish on North America for this cycle. To be fair, it’s kind of like the winner of the ugly duckling contest so it’s not like we’re perfect, but I like our prospects.”

Lokar asked attendees to consider the Great Recession. “The low point for U.S. GDP was 2009. Looking at gross sales of the top 50 for the National Glass Association, your blow wasn’t until 2011. Non-residential construction didn’t bottom out until 2011 because commercial markets are lagging sectors. “GDP is down two quarters,” said Lokar. “GDP is technically in recession. You’re not GDP businesses. You’re finally starting to see project volume again. We’re dusting the COVID cobwebs off. Those big projects are finally coming through. And that will continue next year.”

At the packed Women in Glass and Fenestration panel and mixer, Deb Callahan, CEO of the National Fenestration Rating Council, told the standing-room audience, “The work that we do is incredibly relevant to what the public needs with respect to windows, doors, and skylights. We’re ever evolving to meet the needs of consumers.”

“Women are incredibly strong and prominent at NFRC,” said Callahan. “Make no mistake, that is by design. Our women make up 88 years of combined experience in the fenestration industry. That is significant. It is an incredible brain trust. And it speaks to the power of women at NFRC.”

Callahan told attendees she considers the guidance she would provide to any young woman entering any industry. “Always listen. Advocate for yourself and advocate for each other. Never, ever back down. No matter how much the voice in your head is telling you to do so. Become really proficient in what it is that you do.”