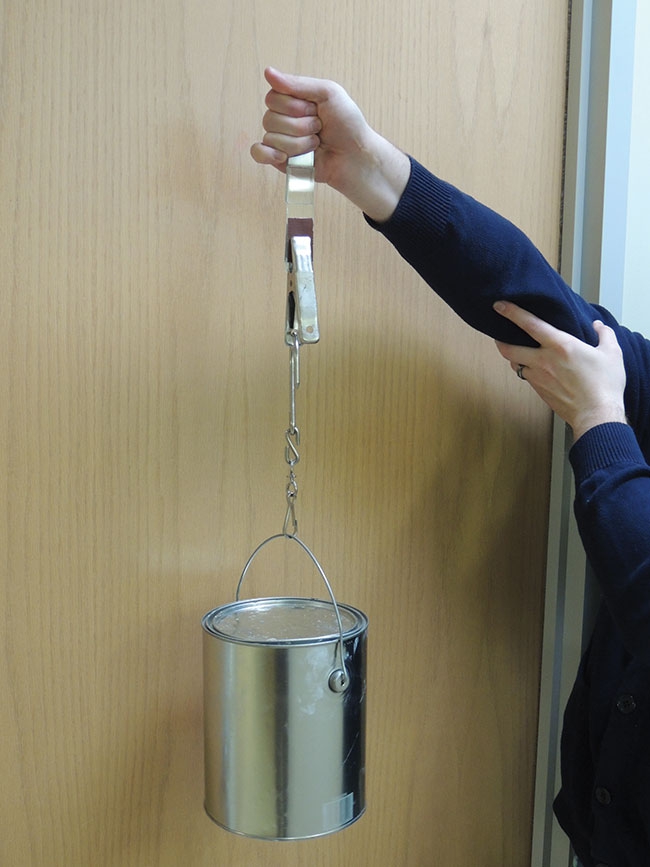 This 6.5-kg paint can is being suspended from a piece of glass that is adhered to another piece of glass using an adhesive based on Sirrus’ new monomer. The set time was five minutes.

Silk screening without heat and laminating without an autoclave. Mind = Blown. According to Kousay Said, chief commercial officer for Sirrus Chemistry, the technology to do these things is in the early stages, however it exists and he is bringing it to a fabricator near you.

It’s a story 130 years in the making. According to Said, Sirrus has been able to stabilize and figure out the initiation of a highly sought-after monomer because of its high reactivity. A monomer is a molecule that binds together with other molecules to form a polymer, a large organic chain of monomers making up the unique properties of the polymers. Still following? Keep up, it will be worth your time.

This particular monomer was first discovered in 1886 and had been highly sought after primarily because of its reactivity, however, until a recent breakthrough, there wasn’t much chemical companies could do with it because it would either simply react with itself or its surroundings. It was Bernard Malofsky, a former senior leader at Loctite, and his son, Adam Malofsky, the former CEO of Sirrus, together with Jeffrey Sullivan who were able to figure out a way to stabilize and isolate this molecule at a yield and purity that would be commercially feasible.

Once the monomer was stabilized, Sirrus was able to do certain things with it. They have been able to expand and now have stabilized 26 different monomers that provide a range of different properties including very high temperature resistance, solvent resistance and significant optical clarity.

The company claims the chemical platform that Sirrus was able to develop, known for Chemilian and Forza, provides fast cure speeds at ambient temperatures without input from energy: a process known as anionic polymerization. The Sirrus polymerization-on-demand technology is designed to significantly reduce cycle times, increase throughput, reduce energy costs, and enable new material selection in a broad range of customer and consumer applications, including auto, electronics, packaging and hygiene.

“All of this is exciting and this technology is looking for applications,” says Said. “So when we start looking for where can we apply this, one of the greatest areas of interest for us is glass as a substrate. Our technology has a tremendous affinity to glass. Glass as a substrate triggers the process anionic polymerization. The material is 100 per cent reactive and its viscosity is water-thin. You can apply this liquid to the glass surface and it becomes a solid polymer that is optically clear.

“Because polymerization is triggered by the glass, the technology also acts as a great adhesive for multiple layers of glass. We’ve bonded three and four layers of glass together and you cannot tell that there is a bond layer in there when you look through it. The optical clarity is incredible. We’ve measured light transmittance through it that is higher than anything else organic that we’ve seen. It’s inherit characteristics lend themselves to safety glass for both architectural and automotive applications.”

Another possibility is an organic alternative to ceramic frit. Imagine silk screening, rolling or digital printing a coating so it doesn’t need to be fired. According to Said, Sirrus has the technology to apply the properties to the glass surface without having to put the energy into it.

By curing at room temperature and taking heat and pressure out of the equation there are obvious savings on operating and capital expenditures. But possibly even more of a game changer is the elimination maximum size constraints, bottlenecks and restrictions on the manufacturing processes associated with tempering and autoclaves. This technology may open up an opportunity for North American fabricators to compete with imported oversized glass.

Said says the technology is also applicable to photovoltaics and dynamic glazing. “This is a perfect way to lower mass without compromising the panel or photovoltaic cell. It protects the glass from breakage and maintains the optical clarity. It is excellent for use in exterior applications and does not introduce a colour shift, which could also allow for warranties to be extended.”

“Our business model says that we work with partners,” says Said. “We are experts at the technology. Relative to the process or application, there are better folks out there that are already in business in their fields and our model says that we work with them and try to bring this technology to the marketplace. We’re in the early stages, however we’ve developed a lot of tests here to prove the concept and we’re looking for partnerships within the fabricating, decorative coating, insulation, laminating, fire resistance and BIPV fields. We’re looking at discussing this technology and its potential application with glass fabricators as well as other manufacturers globally.”

“Our preference is to have our first discussions with end users. It is not to serve them with direct business, but to learn what features and benefits they value the most to help direct our research effort. For example, I’d love to work with a fabricator who was interested to find out how many colours they can put on a piece of glass.”

“It’s the total cost where we are competitive. If we are shutting off furnaces and reducing steps, that is going to be a significant advantage for us. Our feedstock has a competitive cost position and we are around 90 per cent yield so we will compete with the frits all day long but we also will be able to compete with acrylics fairly quickly.”

Lower the cost of goods sold significantly without lowering the performance while increasing size. Imagine fabricators lessening their reliance on films or on primary glass companies where the fabricators can now add decorative or other functionality almost on demand through silk screening, roll coating or digital printing. “For fabricators to invest in capital assets to bring simplicity to their processes and serve the market just in time, we could really change the game here.”

About the author
Rich Porayko is a professional writer and founding partner of Construction Creative, a marketing and communications company located in Metro Vancouver, B.C. He can be reached at richp@constructioncreative.com
Print this page