A years-long initiative culminates in code changes that open up new design possibilities. 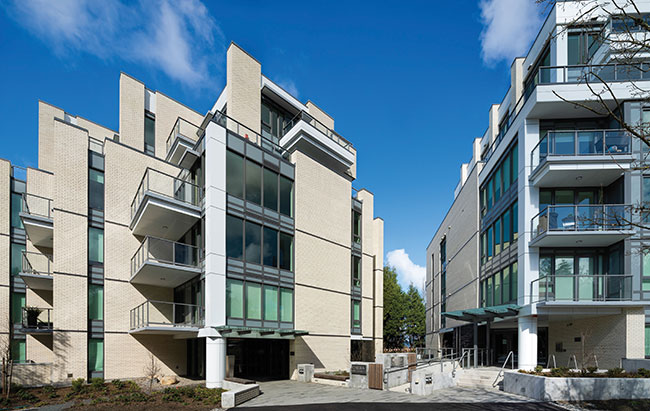 Cascadia’s product was used at The Chelsea in Vancouver, B.C. photo: Paul Grdina

The Canadian window industry welcomes this code change, the culmination of an eight-year effort to lift long-standing and outdated restrictions on combustible window frame materials.

The 2020 National Building Code, published in March 2022, amends Sentence 3.1.5.4.(5), removing the restrictions on the spacing and overall area of combustible window frames that had remained unchanged since 1965. These restrictions were historical artifacts that had long ago ceased to be relevant. The code change proposal was filed by a consortium of Canadian manufacturers and profile suppliers and was supported by a research and testing program designed and executed by the National Research Council of Canada (NRC).

NRC reaches out to industry

This initiative to amend the code actually began with the National Research Council reaching out to the Canadian window industry to fund a research project that could lead to a code change. The NRC had been approached by several Québec manufacturers whose carefully documented but informal fire testing of glazed wood, aluminum and vinyl windows showed that frame materials did not materially inf 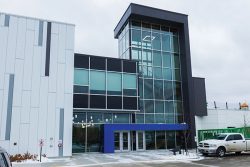 luence the growth or spread of fire. The manufacturers presented their findings to NRC, asking why the restrictions on combustible window frames continued to remain in the code. NRC appreciated that the industry had legitimate concerns and sought a suitable opportunity to engage with stakeholders.

Fenestration Canada provided NRC with a venue in November 2014, at an open industry meeting held during the WinDoor trade show in Toronto. Phillip Rizcallah, the Director of Building Regulations and Manager of the Canadian Codes Centre at the time, frankly acknowledged that the fire provisions of the code “needed to be modernized,” and while change might eventually come, the industry could accelerate the process by funding a research project to support an industry-led code change. With him was Peter Senez of Sereca Fire Consulting who presented the historical background of the restrictions in Sentence 3.1.5.4.(5) and sketched out the outlines of a research program that would include full-scale fire testing to ULC CAN-SS134, Standard Method of Fire Test of Exterior Wall Assemblies.

Discussions between Fenestration Canada and NRC continued through 2015 and in February 2016, a consortium of eleven funding stakeholders accepted a research and testing proposal from NRC.

The test program included ULC CAN-SS134 testing of both combustible and non-combustible floor-to-ceiling window assemblies in a multi-storey arrangement, separated only by the structural members representing floor slabs. It was completed in March 2018 and several months later, Proposed Change PCF 1355 was included in the Fall 2018 Public Review of proposed changes to the NBC. The proposed change—drafted by the SCFP, not the industry—went beyond the initial code change request to simply remove all existing restrictions on combustible window frames.

Following the public review, the proposed change was approved at the April 2019 SCFP meeting with a single amendment to address a concern raised by a minority of respondents that the proposed change should not extend to curtain wall or window wall assemblies composed of continuous, end-to-end combustible framing members.

5)   Combustible window sashes and frames are permitted in a building required to be of noncombustible construction, provided they are vertically non-contiguous between storeys.

The Merriam-Webster dictionary defines contiguous in this way: “1 : being in actual contact : touching along a boundary or at a point . . . 4 : touching or connected throughout in an unbroken sequence”.

It is interesting to note that about the same time the amended change was being debated at the Standing Committee on Fire Protection, two Canadian manufacturers were in the process of introducing combustible window wall and curtain wall products to the market.

In July 2018, GlasCurtain announced the certification of their “GlasCurtain 134” fiberglass-framed curtain wall system (now part of their Thermaframe 7 line) that was successfully tested to CAN/ULC-S134, Standard Method of Fire Test of Exterior Wall Assemblies, the same test that was used for the combustible windows test program. This product has since been installed at a number of buildings in Canada. The test wall included triple-glazed vision units, glass-faced spandrel, and aluminum-faced insulated spandrel assemblies.

In April 2019, Cascadia Windows announced the launch of their fiberglass-framed Universal Series™ Window Wall system. The first project using this product was completed two years later, and a number of projects utilizing the Universal Series are currently underway. It is interesting to note that while the Cascadia product has the appearance of being a contiguous window wall assembly, it incorporates noncombustible slab-edge spandrels, thus complying with the 2020 NBC.

When will combustible windows be accepted in provincial and territorial codes?

It could take up to two years before all provinces and territories adopt the 2020 NBC. In this code cycle, these parties have committed to harmonize with the national model code and to avoid or minimize deviations.

In the meantime, interested parties could consider following the Alternative Solution option in the code, relying on the 2020 NBC code change which recognizes that the fire growth concerns implied in the original wording of Sentence 3.1.5.4.(5) are no longer recognized to be valid.

It is understandable that some building officials, architects, and other design professionals may feel uncomfortable with the elimination of restrictions on combustible window frames that have been in place in Canada for over fifty years. The persistence of the restrictions may have led many industry professionals to believe that they addressed a significant risk of fire growth, but their removal indicates they were overdue for elimination.

Concerned individuals should remember that a code change aimed at their removal was encouraged by the National Research Council in 2014, the wording of this code change was confidently drafted by the Standing Committee on Fire Protection in 2018, and was prudently amended following public review before appearing in the 2020 edition of the NBC.

Why did the combustible window restrictions remain in place for Encapsulated Mass Timber Construction (EMTC)?

The code change proposal that introduced the Encapsulated Mass Timber Construction type to Subsection 3.1.6 of the 2020 NBC (PCF 1024-2017) was submitted one year earlier than the combustible windows code change (PCF 1355). Consequently, and logically for the time, it contained the combustible window provisions of the 2015 NBC. Each of these proposed changes proceeded through the Standing Committee on Fire Protection on its own merits and its own timeline.

I do not believe that is the case. The presence of the legacy restrictions that were removed from Sentence 3.1.5.4.(5) but retained in Article 3.1.6.8 should not be regarded as a concern about the safety of combustible window frames in EMTC construction. Rather, their presence is an artifact of Canada’s code development process. I expect the restrictions on combustible window frames in Encapsulated Mass Timber Construction will be removed in the next edition of the NBC.