A look at the evolution of window wall in Canada. 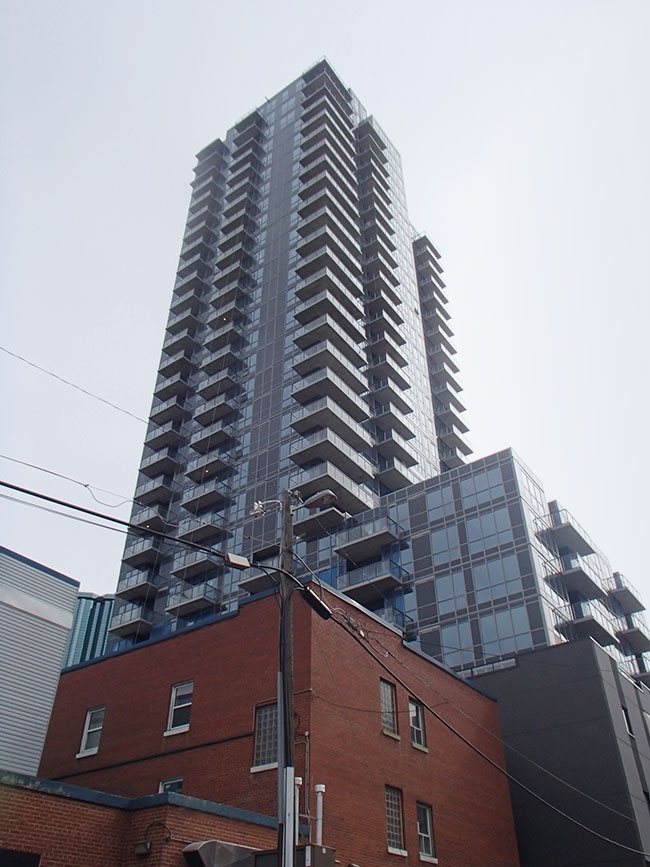 The evolution of Canadian window wall ranged from punched windows in mass masonry walls through vertical strips of floor-to-ceiling windows and brick veneer or precast concrete walls to the complete enclosure of the entire building. credit: Morrison Hershfield

One of the defining characteristics of modern high-rise residential apartment building design in Canada today is window wall. Most systems in use today evolved from punched windows in double-wythe mass-masonry walls in the 1960s, beginning in the Greater Toronto Area. The original punched windows incorporated thermally broken, open-back, extruded aluminum frames.

Fixed glazing was usually double-glazed in the form of sealed, insulating glass units or a fixed exterior pane of single glass with a removable interior panel of single glass. Both types were typically face-sealed to the surrounding frames. Sliding sashes were single glazed in double run configuration with some provisions for drainage. Glass was clear and uncoated. Performance varied. Windows sometimes leaked in the rain. Condensation on glass and frames was a common problem in the winter, and sealed units often fogged after only a few years of service.

The advent of reinforced concrete structural frame construction employing flying form technology enabled a rapid increase in building height in the ‘60s and ‘70s. Masonry wall construction changed, with the exterior wythe of brick becoming a veneer separated from the inner wythe, supported off the slab on shelf angles with through-wall flashings and drainage holes to improve rainwater leakage resistance. The introduction of roll-crimp clamping of aluminum extrusions to plastic thermal breaks and deepening the exterior extrusion to form an integral brick mould allowed window frames to span the larger gap between veneer and inner wythe. Roll-crimp formed frames were also capable of withstanding higher wind loads acting on taller buildings. Windows grew in size along with increasing height of buildings, extending to the floor slab to create vertical bands of windows from top to bottom of the building, separated by masonry veneer or precast concrete clad walls. Slab edges were concealed, yet expressed, with simple sheet metal covers. In the 1980s, the first true window wall systems appeared with the sheet metal slab cover replaced by extending the frame outboard of the thermal break from the top of the floor slab to the head of the window below, concealing the slab edge. This slab by-pass design has become a defining feature of modern Canadian window wall systems from coast to coast.

As buildings grew taller, opaque wall and window system performance had to evolve to address higher climatic loads and increasing resident expectations. Wet-sealed frame joints and rainscreen installation methods for fixed glazing as well as operable glazing were introduced to control water leakage. Window to opaque wall joints are now also rain-screen design to prevent leakage from window assemblies to wall assemblies and vice versa. The PVC thermal break has given way to polyamide and insulating glass units now routinely include low-E coated glass, warm-edge spacers and argon gas fill to reduce heat loss and improve condensation resistance. Sealant materials and methods for assembly of insulating glass have greatly improved durability. These improvements were sometimes ahead of, and sometimes pushed along by material and assembly standards such as CSA-A440 Windows, CGSB-12.8 Insulating Glass Units and by general requirements for building enclosure design in Canadian building codes although in general, standards and codes address punched windows. Window wall as a fenestration product type is not specifically addressed in product standards, including the so-called harmonized North American Fenestration Standard. Following local performance failures in the late ‘90s and early ‘00s, municipal building regulations such as the City of Vancouver Building Bylaw 10908 and insurance industry requirements such as the Ontario Association of Architects/Pro-Demnity Insurance Company’s Window Wall Endorsement and Tarion Warranty Corporation’s Builder Bulletin 19 imposed additional design, testing and construction inspection rules. The National Building Code of Canada followed suit in 2015 with the designation of a new category of building envelope enclosure, Other Fenestration Assemblies, which includes window wall. Subsection 5.9.3 sets out required design, performance and testing requirements and the accompanying appendix describes additional recommended actions. Work is also in progress on an installation standard for high-rise residential window system under the aegis of the Canadian Standards Association. The new 2015 NBC requirements and recommendations will take some time to be adopted and enforced by authorities having jurisdiction but in the author’s opinion, they represent current state-of-the-art and good practice that should be followed.

What the NBC wants
The NBC 2015 performance and testing requirements for “other fenestration systems” are set out in Division B, Part 5 Environmental Separation, Subsection 5.9.3. The following is a summary of requirements, together with commentary to identify changes from past practice for design, construction and installation of window wall systems in Canada.

Structural and Environmental Loads (5.9.3.2) – Compliance is required to Article 5.1.4.1, which sets out generic requirements for all building envelope materials, components and assemblies. Appendix A to article 5.9.3.2 also identifies ASTM E330 as the applicable test method, which is the same test method required for punched windows. Appendix A also identifies AAMA 501, AAMA 501.4 and AAMA 501.6, which are commonly used for curtainwall assemblies, as applicable test methods. This recognizes the broader range of potential movements that a window wall assembly can be expected to accommodate (wind induced interstorey drift, seismic movement), depending on building location, climate, seismic activity, building height, etc.

Heat Transfer (Article 5.9.3.3) – Compliance is required to Section 5.3, which sets out generic requirements for heat transfer for all building envelope materials, components and assemblies. Metal-framed fenestration assemblies are required to incorporate a thermal break to minimize condensation. Appendix A recommends compliance to National Standard of Canada CSA-A440.2, which in turn references procedures developed by the National Fenestration Rating Council for simulation or physical testing to determine U-factor (NFRC 100 and NFRC 200). Two physical test methods are identified for assessing condensation resistance: the temperature index method in CSA-A440.2, which is used for punched windows, or measuring room-side surface temperatures by extending one of the cold cycles of the AAMA 501.5 thermal cycling test, which is often used for assessing condensation resistance in curtainwall. The latter option recognizes that existing guarded hot-box test facilities are unlikely to be suitable for installation of a complex window wall system. The default temperature range and placement of measurement devices during the AAMA 501.5 test may need to be adjusted to provide results suitable for evaluating performance to determine if compliance to the 2015 NBC Article 5.3.1.2 requirement to “minimize surface condensation on the warm side of the component” has been met (Sentence 5.3.1.2.(1).(a)).

Air Leakage (Article 5.9.3.4) – Compliance is required to Section 5.4 for generic requirements that apply to all building envelope materials, components and assemblies. Testing to ASTM E 283 is required. Specific air maximum air leakage rates for fixed glazing and opaque/spandrel areas and vents are set out, consistent with air leakage performance required for punch windows in the Canadian Supplement NAFS, CSA-A440S1.

Water Penetration (Article 5.9.3.5) – Compliance is required to Section 5.6 for generic requirements applicable to all envelope systems of buildings. For “other fenestration assemblies,” lab testing is required to ASTM E331 or to ASTM E547. Testing to ASTM E331 is the norm for curtainwall systems whereas testing to ASTM E547 is the norm for punched windows. Test pressure is determined in accordance with CSA-A440S1 using the Driving Rain Wind Pressure, the same as for punched windows, consistent with the approach in Canada for determining wind-load rain resistance test pressure separately from structural test pressure.

The evolution of Canadian window wall ranged from punched windows in mass masonry walls through vertical strips of floor-to-ceiling windows and brick veneer or precast concrete walls to the complete enclosure of the entire building.

Hidden traps
Discerning readers may notice a certain ambiguity in the 2015 NBC requirements. For example, for water penetration resistance, testing to ASTM E331 or E547 are required in the body of the code, consistent with requirement for punched window systems, while more stringent test methods suitable for high-rise construction such as AAMA 501 “can be used” to evaluate performance in Appendix A. The authors of these requirements are constrained by rules for Canadian building codes to reference standards that are developed following a consensus approval model. AAMA standards are not considered to be so, with the exception of NAFS, which is a joint standard with CSA and thus must follow rules for the development of consensus-based standards. It is important to understand this because some window wall manufacturers may not have performance test documentation available that meets all of the strictly mandatory requirements. Also, as of March 1, only the Yukon, Northwest Territories and P.E.I. have adopted building regulations based on the 2015 NBC, so compliance is not yet required in most jurisdictions where window wall systems are likely to be used. However, in our experience, window wall manufacturers that supply product for U.S.A. construction projects have tested to the AAMA standards identified in Appendix A because such performance is expected in that market. Therefore, in Canada today it is possible to obtain window wall systems consistent with 2015 NBC mandatory and Appendix A supplementary performance requirements and test methods. The assistance of a knowledgeable building enclosure consultant is invaluable to ensure such state-of-the-art design guidelines are used, to avoid future performance problems, costly litigation and repair.

Acknowledgments
The authors extend their appreciation to Martin Cash, president and CEO, and Jody Cash, vice-president, of Quest Window Systems, and Peter Kuschnir, technical manager of Starline Windows, for comments regarding the development of Canadian window wall systems and discussions regarding past, current and future trends. The authors also wish to acknowledge the assistance of members of the façade engineering team at Morrison Hershfield in offices across North America for commentary on window wall design, construction and installation techniques in Canada.