A look at the promise and challenges in additive manufacturing. 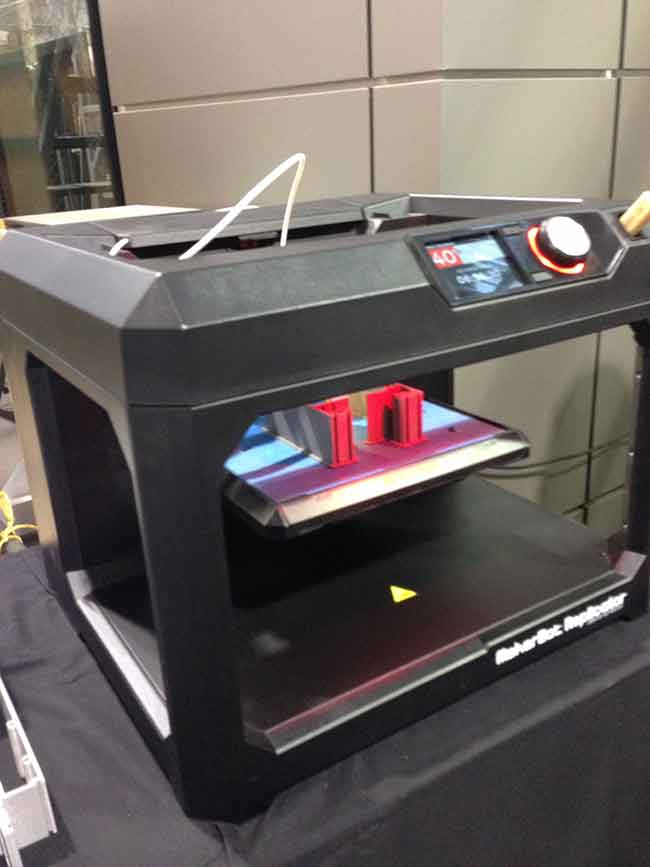 “It’s an evolution, not a revolution.” That’s how James Janeteas, president of 3D printer provider Cimetrix Solutions, described additive manufacturing — or 3D printing as it is often called — at an event in Toronto late last year.

There is a lot of hype surrounding the technology, but Janeteas cautioned manufacturers not to fall into the “pit of disillusionment” when it comes to what 3D printing technology can do. Because of speed, cost and resolution factors, the technology just doesn’t make sense for some applications.

“As much as the industry is hyping it up, it’s important to understand that some of the expectations that you may hear about our technology being able to perform may not be met,” he said. “It’s
important not to get discouraged.”

Instead, he urged companies to continue looking for opportunities to leverage the technology. Because there are opportunities.

Application options
Additive manufacturing has been well-embraced as a technology that can provide fast prototyping or produce a small quantity of parts for testing.

“It’s predominantly a fast route to commercialization,” says Nigel Southway, secretary and past chair of the SME’s Toronto Chapter. “So you can take your design and make one part or two for testing of the final product. And then when you’ve got the final product done, then you change technologies and make the plastic parts in volume out of a mould tool using injection moulding or some other form of plastic application,” he explains. “You can generate a sample that’s an equivalent enough part to the final moulded part to be able to pass all the tests and get a jump on your product introduction.”

Although the technology will continue to evolve and improve, Southway says “the current additive manufacturing technology speed is too slow to, for example, make bottle tops or even computers, quite frankly. Any high-volume product cost requirements would not be satisfied with the cost curve in additive technology…It’s mainly for people that want to do rapid proto-parts or can afford the premium to make low-volume samples.”

There are many present uses for a 3D printer in the glass industry, including much quicker production of tooling compared to traditional methods, says John O’Hara, sales manager at Chicago-based 3D printer maker Sciaky. “These tools can be used,” he says, “to form vinyl, aluminum and stainless steels into parts of windows or doors.” Reuben Menezes, a 3D printing solution specialist at Proto3000, lists other industry applications to include design testing, marketing of new concepts, production of jigs and fixtures for inspection or assembly, and extrusion test moulding. Multi-material printing, he adds, can allow for testing of seals without a two-step process.

But Southway explains that “the unit part cost may still be higher than conventional methods, the throughput may also be slower, and the additive manufacturing process may still require some secondary machining operations to meet finish and tolerances.”

He maintains that this is not a cost-effective solution for a part you can make easily in other technologies. However, one area where this technology offers a great opportunity with significant leverage, says Southway, is in toolmaking.

“It will add a real advantage to toolmakers and part designers who have to solve tooling constraints and wish to use exotic metal
materials.”

Tooling time
A challenge when it comes to producing tooling for plastic moulding is getting coolant through to the point where the heat is generated. According to Southway, additive manufacturing offers far more options to solve that problem because it allows tool designers to more cost effectively build complicated waterways or thermal management ports into the structure for the cooling process that will also improve the moulding performance.

“In some cases — and provided the toolmakers embrace this technology correctly — some difficult problems can be solved, such as improved internal cooling chambers for the mould-making process and difficult profiles produced for press and form tooling. This could translate into improved final tool part throughput and performance, and also improved quality and repeatability,” Southway says.

He predicts that additive manufacturing will change the way we do tooling and make companies that leverage the technology more competitive. “That always drives manufacturing. Better tools are always the differentiator,” he says. “The toolmaker and the prototyping engineers will want and need [additive manufacturing] to compete.”

All Weather Windows of Edmonton uses 3D printers to create machining jigs and router templates which are often used for low-volume production on the floor. “For low-volume small plastic parts, it can actually make sense to 3D print the parts themselves instead of paying for an injection mould,” says Jesse Tufts, product development engineer. “Small caps, plugs and clips can function just fine as 3D printed parts and can usually be printed reasonably quickly and economically.”

Challenges that remain
Gary Cluthe, CEO at Duron Plastics in Kitchener, Ont., bought an EOSINT M270 system about five years ago. His company specializes in custom injection moulding and mould making. He thought the technology would be ideal for mould making.

At this point, however, their EOS machine is not being used for this purpose. Instead, aerospace and military contractors have been using it for their needs. And now there are inquiries almost every day about having parts produced on the machine.

“For us, the costs don’t warrant making tooling yet,” Cluthe says. “And it hasn’t worked out well for cavity core work. It has been too difficult to polish out deep ribs in the moulds we do.”

That is not an uncommon issue. It is widely accepted that the current additive technology will need to be integrated with existing metal-removing machining technologies to support a final finished part.

To achieve the benefits of additive manufacturing, Southway explains the technology must be integrated with existing metal-removing machining technologies such as surface texture and finish, and tolerance limits may need metal-removing processes as secondary finishing operations.

But advancements are happening, says Vesna Cota, additive manufacturing design and development specialist for Tyco Electronics Canada, a TE Connectivity company based in Markham, Ont. The company, which designs and manufactures connectivity products and solutions for a variety of industries, mainly uses additive manufacturing for prototypes, trims and fixtures — to compress response and development time, and to maximize the performance of their products. But they also use the technology for fully functional prototypes in production material using rapid tooling.

“Additive manufacturing technologies are very well suited for tool repair and conformal cooling, with many successful implementations so far, yet the build times and/or surface finishes have been a deterrent,” Cota says. “Advancements in those areas, along with new materials and the forthcoming hybrid additive manufacturing systems, should prompt reconsideration. Even those who took a look at it just two or three years ago may find themselves surprised by the advancements since.”

The advancements, she says, include “continuous incremental but significant improvement of processes, build speeds and build sizes. There is still a great need for better defined process controls. The proprietary materials and need for characterization drive high material costs, but at the same time, many new materials are being developed and released, exhibiting superior performance to any existing ones.”

But to really leverage the technology, Southway says that additive metal technology will require a strong engineering application consulting capability to support the development of new design approaches, as well as a clear knowledge of the different design rules and part planning activities.

“Contrary to the public’s belief, the metal additive process is not a push-button technology. There’s a lot of design rules, there’s a lot of planning that needs to go into making a part and making a machine produce it. To do it well, you also need the designer to understand the constraints as well as the significant opportunities if they harness the technology correctly,” says Southway. “You can’t just take your existing drawings to this machine and make them. You’ve got to redesign your part or your tooling around the technology and the mission of your final product for maximum benefit.”

Moving forward
It’s not just the high-tech aerospace and automotive industries that should be leveraging the technology. There are opportunities for “traditional industries,” too, Southway says.

In terms of the future, Tufts says, All Weather Windows turns to materials, noting that some new Stratasys printers can print in nylon, and therefore provide increased possibilities for
doing small production runs of custom parts. “We have a lot of aluminum extrusion profiles as well as PVC extrusions,” he adds, “and a 3D metal printer could speed up the prototyping process for these designs. As this technology develops, I can see 3D metal printing becoming a lot more common and preferable in some ways to CNC machining or wire EDM due to the material efficiency.” He points to multi-material 3D printing as another area of advancement. “We can’t do it here but we often send out weatherstrip designs to be 3D printed in rubber-like materials before getting dies cut,” Tufts explains. “They can print combinations of flexible and rigid materials on the same piece, for example a weatherstrip with a stiff base and a more flexible top, or a prototype of a rigid plastic extrusion with a co-extruded gasket.

And while there are new opportunities for the application of this technology that will continue to emerge and evolve, it is not meant to replace your current processes, but rather to complement them.

Says Southway, “When you add it to the suite of processes and tools that the manufacturing engineer has, that’s when it becomes powerful.”

One-step prototyping
This small section of vinyl window profile was fabricated on a 3D printer. Plastics are the most common material used in additive manufacturing, but metal parts can be made as well.

Extruding is certainly faster for mass production of lineal, but a 3D printer can change the part it is making as fast as selecting a different file in the computer, with no tooling changeover.

This article originally appeared in the May 2014 issue of Manufacturing Automation.